↓
Home→Daily→Thursday: The Victory of the Gospel

On a set day, the Jews came in large numbers to hear Paul’s presentation of the gospel (Acts 28:23). 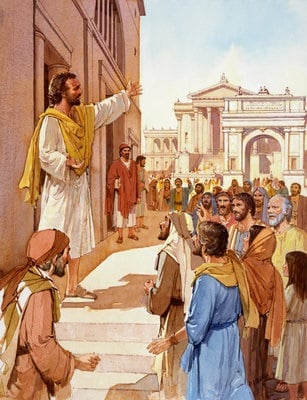 The quotation from Isaiah 6:9-10 describes what happens when people refuse to accept the divine message. Though some Jews believed, others didn’t, and so, because of this great dispute, the apostle had no choice but once again to turn to the Gentiles (Acts 13:46-47; Acts 18:6).

Paul had to wait two years to be tried by the emperor. Meanwhile, though restricted to his house-prison, he was still able to share the gospel without hindrance with those who came to him. The last scene of Acts is one that emphasizes the victory of the gospel, as no force, whether Jewish or Roman, had been able to stop its progress.

It is not clear why Luke finishes his book at this point, as there is evidence that, due to the weakness of the case against Paul, he was released from this imprisonment, went on another missionary journey, and was again taken to Rome and executed (2 Tim. 4:6-8). Perhaps, from the standpoint of Luke’s literary purpose, by having been preached even in distant Rome, the gospel had already reached the “ends of the earth” (Acts 1:8, NIV).

“Paul’s patience and cheerfulness during his long and unjust imprisonment, his courage and faith, were a continual sermon. His spirit, so unlike the spirit of the world, bore witness that a power higher than that of earth was abiding with him. And by his example, Christians were impelled to greater energy as advocates of the cause from the public labors of which Paul had been withdrawn. In these ways were the apostle’s bonds influential, so that when his power and usefulness seemed cut off, and to all appearance he could do the least, then it was that he gathered sheaves for Christ in fields from which he seemed wholly excluded.”—Ellen G. White, The Acts of the Apostles, p. 464.

From the standpoint of the church’s mission, however, it could be said that the book of Acts—or the history of the spreading of the gospel—is not yet finished, and it is here that each one of us enters the picture. Many more exciting and dramatic chapters have been written throughout the centuries, sometimes with the blood of God’s faithful witnesses. Now it is our turn to add one more chapter, the last one (we hope!), and bring the mission Jesus left with the disciples to its full completion—“and then the end will come” (Matt. 24:14, NKJV).