Read Daniel 6:24-28. What testimony does the king give about God?

An important point of the narrative is the fact that Darius praises God and recognizes God’s sovereignty. This is a culmination, even a climax, of the praises or expressions of recognition offered to God in the previous chapters (Dan. 2:20-23; Dan. 3:28-29; Dan. 4:1-3, Dan. 4:34-37). 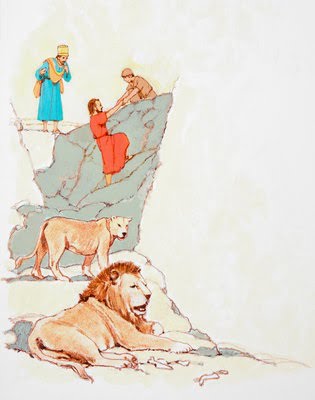 Like Nebuchadnezzar, Darius responds to Daniel’s deliverance by praising God. But he does more, too: he reverses his previous decree and commands everyone to “fear before the God of Daniel” (Dan. 6:26).

Read Daniel 6:24. What might we find rather troublesome about this verse, and why?

There is, however, one disturbing problem, and that is the wives and the children who, as far as we know, are innocent, and yet who suffer the same fate as the guilty ones. How can we explain what seems to be a mishandling of justice?

First, we should note that the action is decided and implemented by the king according to Persian law, which includes the family in the punishment of the culprit. According to an ancient principle, the entire family bears responsibility for the offense of a family member. This doesn’t mean it’s right; it means only that this story fits with what we know about Persian law.

Second, we must note that the biblical narrative reports the event but does not endorse the action of the king. In fact, the Bible clearly forbids that children be put to death because of the sins of the parents (Deut. 24:16).