I recently met a woman whose husband died suddenly and tragically less than a year ago. They had been together over forty years and had been high school sweethearts. She has the most amazing attitude. Yes she misses him terribly, but she knows that she will see her husband again. In fact, they had promised each other long ago that if they didn’t see Jesus come together, they would meet at the Tree of Life. I’ve known other folks who made arrangements to find each other beside the Sea of Glass. Will they really remember to do that when we all get to Heaven? I don’t know, but it gives us hope in a situation in which many have no hope at all. 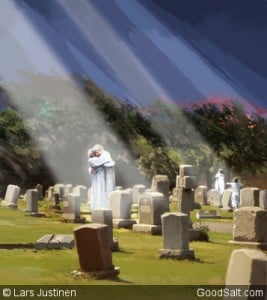 I don’t believe I’ve ever been to a funeral for someone who didn’t believe in some kind of life after death, so I don’t really know what that ceremony would be like for anyone who did not have such a belief. What would anyone say to comfort the friends and relatives? What songs would they sing? I really can’t imagine how it would go. It would seem like a terribly hopeless situation.

The Christians in Thessalonica had the mistaken belief that only the believers who were alive when Jesus came back would go to heaven. Can you imagine the almost frantic pressure you would feel to help your loved ones live as long as possible? Thankfully, Paul heard about this and wrote to them about it in 1 Thessalonians 4:13-18.

“But I do not want you to be ignorant, brethren, concerning those who have fallen asleep, lest you sorrow as others who have no hope. For if we believe that Jesus died and rose again, even so God will bring with Him those who sleep in Jesus. For this we say to you by the word of the Lord, that we who are alive and remain until the coming of the Lord will by no means precede those who are asleep.

For the Lord Himself will descend from heaven with a shout, with the voice of an archangel, and with the trumpet of God. And the dead in Christ will rise first. Then we who are alive and remain shall be caught up together with them in the clouds to meet the Lord in the air. And thus we shall always be with the Lord. Therefore comfort one another with these words.”

“The hope and joy which this assurance gave to the young church at Thessalonica can scarcely be understood by us. That letter, coming from their father in the gospel, was believed and cherished by them, and their hearts went out in love to him who had brought them the precious light of truth. He had told them these things before; but at that time their minds were grasping doctrines new and surpassingly strange to them, and it is not surprising that the force of some points had not been vividly impressed upon their minds. But they were hungering for truth, and Paul’s epistle gave to their souls new hope and strength, a firmer faith in, and a deeper affection for, the Redeemer who had brought life and immortality to light through his death.
“The darkness that had enshrouded the sepulcher of the dead was dispelled; for they now knew that their believing friends would be resurrected from the grave, and enjoy immortal life in the kingdom of God. A new splendor now crowned the Christian faith, and they saw a new glory in the life, sufferings, death, and resurrection of Christ.” 9E.G. White, Sketches from the Life of Paul, p. 112)

Can you imagine how excited you would be the first time you heard that news? What a relief! What hope! Christians never have to say a final Good Bye but a “see you later.”

“Sheldon Vanauken was a student of the English professor and Christian apologist C. S. Lewis in the early 1950s. He recounts in his book A Severe Mercy the story of his last meeting with his mentor when Vanauken was leaving Oxford for the United States. Over one final lunch together at a pub, they had spent time wondering aloud about the nature of life after death. When they had finished eating, they stood outside of the pub, talked for a few more minutes, and just before parting ways, Lewis said to Vanauken, ‘I shan’t say goodbye. We’ll meet again.’ The great apologist then plunged into the traffic to cross the street while Vanuaken watched his friend walk away. When Lewis got to the other side of the street, he turned around, anticipating that his friend would still be standing there. With a grin on his face, Lewis shouted over the great roar of cars, ‘Besides—Christians never say goodbye.’”1

What a wonderful hope we have as Christians! Not only do we never have to say goodbye, but when we meet again in Heaven, we will have new perfect bodies and minds. But you know what will be even more exciting than finding our family and friends will be that Jesus will be there to greet every single one of us.

Face to face with Christ, my Savior,
Face to face—what will it be?
When with rapture I behold Him,
Jesus Christ who died for me.

Only faintly now, I see Him,
With the darkling veil between,
But a blessed day is coming,
When His glory shall be seen.

What rejoicing in His presence,
When are banished grief and pain;
When the crooked ways are straightened,
And the dark things shall be plain.

Face to face I shall behold Him,
Far beyond the starry sky;
ace to face in all His glory,
I shall see Him by and by!2

I can hardly wait! What about you?

I’ll meet you at the Sea of Glass.