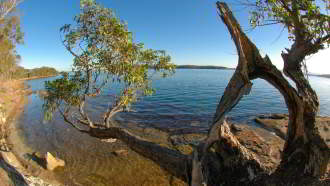 “And the Lord God took the man and put him in the Garden of Eden to tend and guard and keep it.” Genesis 2:15

A few years ago, when we were hearing quite a bit about lowering our carbon footprints, my kids and I had an ongoing joke. Because there seemed to be such a push to do away with all carbon output, taken to its logical, albeit extreme, conclusion all the earth’s animals would have to stop breathing and if there was no carbon at all, the earth’s plants would all die. Realizing the impossibility of that, whenever we heard someone talking about shrinking their carbon footprint one of us would call out, “Save the trees — exhale!”

All that is to make a point and ask a question – the first is that sometimes in our zeal to correct one problem we create at least one other one, and second, to what lengths should we, as Christians who believe in a literal seven-day creation go to take care of the planet that God created as our home?

Sometimes it seems like those who believe in evolution are more interested in saving and protecting the planet than many Christians. That seems backwards to me. If someone believes that the entire basis of nature is “survival of the fittest,” why should they expend any thought or effort on protecting the snail darter or any other endangered animal?

On the other hand, Jesus clearly told us to look after those who are the least in the world’s eyes.

What is the extent of our responsibility when it comes to looking after our planet? Do we go as far as the president of Bolivia did on April 20, 2011? That day …

“marked the International Day of Mother Earth with a ceremony in the Plaza Murillo, the center of political power. An ancient ritual shared center stage with speeches in which authorities in this Andean nation extolled the Law of Mother Earth – the world’s first legislation that grants to all nature rights equal to humans.

That all sounds great, except I think it’s a bit late for the “free from human alteration” bit. That ship has already sailed. So how would the Bolivian government go about implementing these rights? Is that what God intended when He put Adam in the Garden of Eden to “tend and guard and keep it”?

Of course, tend, guard and keep do not mean that we have the freedom to exploit nature in any way. That kind of thinking has created events like the Dust Bowl and hunting the bison to near extinction. Far from allowing people to exploit nature, we are asked to be wise stewards of all that God has placed under our care.

As stewards our job is to carefully shape and cultivate nature to produce the very best results – to benefit the most people and to glorify God. I think one of the ways in which the “Law of Mother Earth” and other secular earth protection movements, go wrong, is that they make man 100% of the problem – Earth would be better off without people. Whereas, according to God, man is His crowning achievement. He put man in the garden to take care of it, even before there was sin to destroy it.

“Will we consider this? In its human wisdom, the world knows not God. Its wise men gather an imperfect knowledge of God in His created works, and then in their foolishness exalt nature and the laws of nature above nature’s God. Nature is an open book which reveals God. All who are attracted to nature may behold in it the God that created nature. But those who have not a knowledge of God in their acceptance of the revelation God has made of Himself in Christ, will obtain only an imperfect knowledge of God in nature. This knowledge, so far from giving elevated conceptions of God, so far from elevating the mind, the soul, the heart, and bringing the whole being into conformity to the will of God, will make men idolaters. Professing to be wise men, they become fools. Those who think they can obtain a knowledge of God aside from the Representative whom the word declares is “the express image of His person,” will need to become fools in their own estimation before they can be wise. Christ came as a personal Saviour. It is impossible to gain a perfect knowledge of God from nature, for nature itself is imperfect. A curse and blight is upon it. Yet the things of nature, marred as they are by the blight of sin, inculcate truths regarding the skillful Master Artist. One omnipotent in power, great in goodness, in mercy, and love, has created the earth, and even in its blighted state much that is beautiful remains. Nature’s voice speaks, saying that there is a God back of nature, but it does not in its imperfections represent God. Nature cannot reveal the nature and character of God in His moral perfection.” (E.G. White, Manuscript 86, 1898, p. 348)

Do you remember the first time your parents left you “in charge” of your house while they ran an errand or went out for an evening? No matter how long your parents were away, you felt the responsibility for taking the best care you could of your home. You were very careful to maintain it in the way your parents had left it.

God has left us “in charge” of our home until He comes back. We have a responsibility to take the best care of Earth as we can, not because we worship it, but because we love and worship the One who created it.