The question is asked on Tuesday’s section of this week’s lesson, “In what ways have you discovered for yourself the true spiritual blessings that come from paying tithe? How has paying tithe helped increase your faith?” 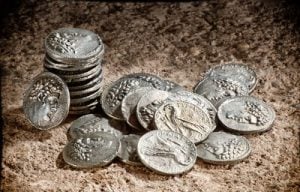 After returning home to Tulsa from Southern Adventist University, I got a job at Taco Bell, and at 19 years old moved into my own apartment. It was a nice junior one-bedroom apartment. My rent was only $200.00 a month. What I would give to take my current salary and go back to those days! My parents both served as treasurers for the Tulsa First SDA Church for decades. They had instilled in me the importance of tithe. My dad always says, “Churches don’t have financial problems. They have spiritual problems.” If everyone sacrifices and gives systematically, as the Bible says, the church will always have enough. While paying an honest tithe, even when barely making above minimum wage, I had no problems paying my bills. I remember getting bills in the mail and going inside and writing a check to pay them right away. I did not need to wait until the due date. God was blessing.

Funny thing is, as I started making more money, I started running into financial issues. I had a budget, but did not carefully watch myself during the month, thinking I had plenty of money. Still in my early twenties, I got a job working in the warehouse of a business forms company, making almost twice as much as I was at Taco Bell. Not keeping close track of what I was spending, I ran into financial problems, and for the first time started falling behind on my bills. I had recently transferred to a smaller church outside Tulsa, where I was serving as an elder.

I was the youngest elder in the Oklahoma conference and the most immature too, as I came up with a knucklehead idea for my new financial problems. Had I still been in the church where my parents were treasurers I probably never would have done this. I had recently been promised a reasonable raise at work, but every week it failed to show on my pay check. So I decided to use all my money to pay my bills, and stop returning tithe until I got my raise. Each week I recorded what my tithe was so I could pay it once my raise came, but week after week there was no raise on my check. I recorded what I owed in tithe to pay once my raise came. The tithe was adding up. Finally one night after a group Bible study I told an older lady in my church that I felt bad not being able to tithe, but that I would tithe once my raise showed up on my check. She said firmly, “William, you are not going to get your raise until you return your tithe.” Now I knew good and well that people get raises all the time who never tithe. However I knew too that God is a personal God, and He was speaking to me through my older friend.

We received our pay checks every Friday, but the following Friday I did not go into work as I had too much overtime. Yes, God was blessing me with overtime while I was waiting on my raise and even withholding my tithe. Even though I did not get my pay check on Friday, I returned my full tithe that Sabbath. I did not know what I was going to do, but I knew I had to do what was right.

Monday morning I went in to work and picked up the pay check that had been lying in my box since Friday. I opened it up, and there was my raise! Was the raise a blessing? Yes! But the greatest blessing was knowing a God of love was watching over me, and even speaking to me through my older friend in my Bible study group. He loves me and takes care of me. All I have to do is trust in Him instead of my knucklehead ideas!