The deity of Christ is the foundation of our faith. A human being could never be our savior, no matter how extraordinary his life may have been. Throughout the entire New Testament, we have evidence of His divinity. We will focus on what Jesus Himself taught about this subject. 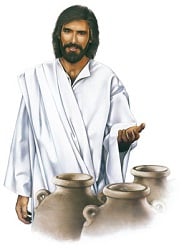 It was, for starters, not a simple matter for Jesus to explain who He was. His mission required Him to make known that He was the Messiah, God in the flesh; however, there is no record of Him saying publicly, I am God or I am the Messiah. Had He done so, His life could have immediately been taken. Therefore, He chose to hint at His divine nature and indirectly led His hearers to know His deity.

As Jesus gradually revealed His divine nature, most of His hearers understood Him but refused to accept His claim because it didn’t fit with their preconceived idea of the Messiah. This is evident by their request: How long do You keep us in doubt? If You are the Christ, tell us plainly (John 10:24, NKJV). Unfortunately, the context shows that their question was not sincere.

As we saw yesterday, Jesus made many references to His special relationship with His Father. This was one of the methods He used to reveal His deity. Many understood clearly that when He said that God was His Father, He was making Himself equal with God (John 5:18).

Read Luke 5:17-26. In what very powerful ways did Jesus here reveal His divinity without openly saying it?

It required nothing less than creative power to restore health to that decaying body. The same voice that spoke life to man created from the dust of the earth had spoken life to the dying paralytic. — Ellen G. White, TheDesire of Ages, p. 269, 270.

Jesus claimed the divine prerogative to forgive sins. He also said that He Himself will sit on the throne of His glory (Matt. 25:31, NKJV) and judge all the nations, deciding the eternal destiny of each one, something that rests on God’s authority alone. How much more could He have done here to reveal who He really was?

Think about how hard-hearted some of these leaders were toward Jesus. And these men were supposed to be the spiritual guardians of the people? How can we make sure we don’t become hard-hearted in our own ways, as well?