↓
Home→Daily→Tuesday: The Court was Seated

After the vision of the four animals and the activities of the little horn, the prophet sees a scene of judgment in heaven (Dan. 7:9-10, Daniel 7:13-14). As the court convenes, thrones are put in place and the Ancient of Days takes His seat. As the heavenly scene shows, thousands and thousands of heavenly beings minister before the Ancient of Days, the court is seated, and the books are opened. 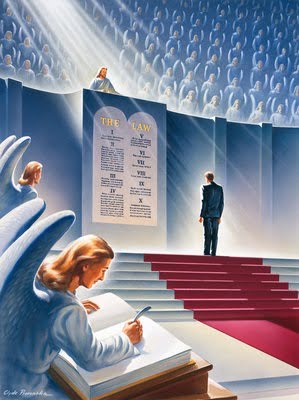 What’s important to note about this judgment is that it occurs after the 1,260-year period of the little horn’s activity (A.D. 538-1798; see Friday’s lesson) but prior to the establishing of God’s final kingdom. In fact, three times in the vision the following sequence appears:

The Old Testament describes several acts of judgment from the tabernacle and temple, but the judgment referred to here is different. This is a cosmic judgment that affects not only the little horn but also the saints of the Most High, who will eventually receive the kingdom.

Daniel chapter 7 does not describe the judgment or give details about its beginning and closing. But it implies that the judgment is undertaken in the wake of the little horn’s attack against God and His people. The point here, then, is to emphasize the beginning of a judgment of cosmic proportions. From Daniel chapters 8 and 9 (see following weeks), we will learn about the time of judgment’s beginning and the fact that this judgment is related to the purification of the heavenly sanctuary on the heavenly Day of Atonement. The lesson here is that we clearly will have a pre-Advent judgment in heaven that will be in favor of God’s people (Dan. 7:22).