↓
Home » Tuesday: Shake the Heavens and the Earth

After describing the festal gathering occurring in heaven, Paul warns the readers that they need to pay attention to God’s voice because God will shake “yet once more … not only the earth but also the heavens” (Hebrews 12:26, ESV). Paul is saying that although Jesus has been enthroned in heaven, our salvation has not been consummated. We need to pay attention because an important event is still to happen. 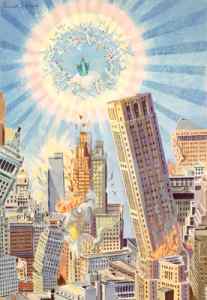 In the Old Testament, the shaking of the earth was a common figure for the presence of God, who shows up to deliver His people. When Deborah and Barak fought against Sisera, God fought from heaven on their behalf (Judges 5:20). This is described as a powerful earthquake, a shaking of the earth and mountains because of the presence of God (Judges 5:4-5). We find this same image appearing throughout the Old Testament when God arises to deliver the oppressed (Psalm 68:7-8; Psalm 60:2; Psalm 77:17-18). Thus, a shaking signaled God’s judgment as He asserts His authority over the peoples of the earth. The prophets predicted this would happen in the Day of the Lord (Isaiah 13:13, Isaiah 24:18-23).

For Hebrews, the “shaking” of heaven and earth refers to the destruction of the enemies of God. This is what God promised at the enthronement of Jesus. God said to Him: “Sit at my right hand until I make your enemies a footstool for your feet” (Hebrews 1:13, ESV). Thus, Jesus has defeated the enemy (Hebrews 2:14-16) and been enthroned (Hebrews 1:5-14), but the enemies have not yet been destroyed (Hebrews 10:11-14, 1 Corinthians 15:23-25).