“Who gave himself for our sins, that he might deliver us from this present evil world, according to the will of God and our Father” (Galatians 1:4).

There is no question: one of the key themes (if not the key theme) of the New Testament is that Jesus Christ died as the Sacrifice for the sins of the world. This truth is the foundation of the entire plan of salvation. Any theology that denies the blood atonement of Christ denies the heart and soul of Christianity. A bloodless cross can save no one.

Meditate upon the text for today and then answer these questions: Did Jesus volunteer to die? For whom did He die? What would His death accomplish? 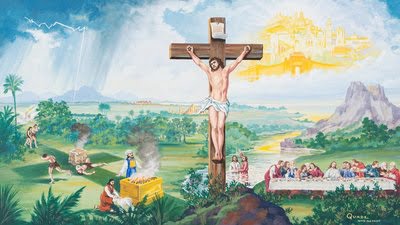 Substitution is the key to the entire plan of salvation. Because of our sins, we deserve to die. Christ, out of His love for us, “gave himself for our sins” (Galatians 1:4). He died the death that we deserve. The death of Christ as the Substitute for sinners is the great truth from which all other truth flows. Our hope, that of restoration, of freedom, of forgiveness, of eternal life in paradise, rests upon the work that Jesus did, that of giving Himself for our sins. Without that, our faith would be meaningless. We might as well place our hope and trust in a statue of a fish. Salvation comes only through the blood, the blood of Christ.

“It is not God’s will that you should be distrustful, and torture your soul with the fear that God will not accept you because you are sinful and unworthy … You can say: ‘I know I am a sinner, and that is the reason I need a Saviour … I have no merit or goodness whereby I may claim salvation, but I present before God the all-atoning blood of the spotless Lamb of God, which taketh away the sin of the world. This is my only plea.’ ” — Ellen G. White, The Faith I Live By, p. 100.