↓
Home→Feature→Once Upon a Time – Telling Stories That Teach

I love a good story, don’t you? 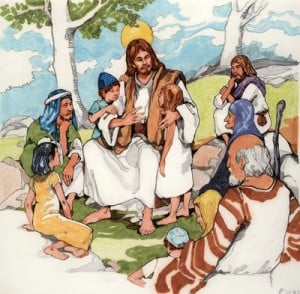 Storytelling is a distinctly human trait. No matter how proficiently animals like dolphins, apes and some birds can communicate with us, they don’t care about stories. People, on the other hand, seem to be born craving stories. Think about the child at bedtime: “One more story, Mommy! Just one more.”

As we move through our lives, we find stories almost everywhere – books, movies, TV shows, music, even commercials tell us tiny little 30-second stories. The Bible is filled with stories. Who doesn’t enjoy retelling or listening again to the stories of Joseph, his beautiful coat and his treacherous brothers, Samson’s feats of strength, and King David’s battle with Goliath.

A well-told story can transcend time and place, social status, education level, and political or religious affiliation. That explains why Jesus used stories and parables so often in His teaching. The people who came to hear Jesus speak varied in intellect, occupation and education. There were theologians, farmers, beggars. If He had directed His lessons to any one group, He would have lost the interest of the others. By telling stories, each person was engaged and able to understand the story within the framework of his own education and experience.

As I thought about the effectiveness of storytelling as a teaching tool, I remembered a study I’d read about that found that when people are shown a normal (realistic) drawing of a person along with a caricature of the same person, they will recognize the caricature more readily than the realistic drawing.

Why? Well according to the study, it’s because the caricature minimizes the “average” parts of a person’s face and emphasizes the distinctive features.1

“OK,” I hear you saying, “but we’re talking about stories and parables, not caricatures.”

True, but I believe that the best stories do the same thing as caricatures do – they condense ideas into their most important points so that they’re easier for us to imagine and remember.

In the story of the Prodigal Son, Jesus could have told His audience about the step-by-step progression that brought him to ask for his inheritance. He could have dealt with the relationship between the two brothers or the feelings of their mother. But by telling just enough, Jesus made it possible for every one of us to share the experience of each of the characters in the story.

The context of a well-told story allows us to tell about things we probably wouldn’t say outside the story.

An example is the story of David and the prophet Nathan. David pulls off what he figures is the perfect cover-up of his affair with Bathsheba, and then Nathan shows up and tells him a parable about a rich man stealing a poor man’s only, much-loved sheep. Once David is properly worked up about the injustice of that story, Nathan points out that David had done just that.

We can only imagine what would have happened if Nathan had marched into David’s throne room and spelled out all the things David had done wrong. Nathan might not have lived through the afternoon. As it was, David was convicted by the story and was brought to repentance instead of defiance.

Jesus could have gone from person to person spelling out where each was wrong and needed to change, but by using parables Jesus presented the needed information without backing anybody into a corner. This method allowed each hearer to face his or her own need for forgiveness and redemption and take steps to receive them.

Jesus’ use of parables and stories is evidence that His love lets us choose our own destiny. He simply puts truth before us, and lets us make our choice.

What is the better way to share Jesus’ love with the people we meet – pointing out what they’ve done wrong or showing them what Jesus has done to make us right for His Kingdom?

It seems to me that Sabbath School teachers, elders and pastors should learn to tell  stories like Jesus did in order to teach as He did.

What do you think?

What do you think? Cancel reply