In 2006, a gunman walked into an Amish school. The teacher ran for help, and 13-year old Marian Fisher realized help would not arrive before the gunman started shooting. To buy time for the other students, this young girl told the gunman, “shoot me first.”  This young girl was prepared to make a sacrifice that a few older men on the Titanic shied away from. She made a great sacrifice as Jesus said, 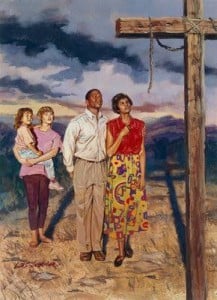 Greater love hath no man than this, that a man lay down his life for his friends.  John 15:13

Yes, she did make that sacrifice, as the gunman obliged her request and shot and killed her first. I can’t imagine! You would think the young girl’s willingness to sacrifice herself would have broken what little heart the gunman had left.

As great as this sacrifice was, it was not the ultimate sacrifice. Her sacrifice is a metaphor of the ultimate sacrifice Jesus made, when He died the second death for us on the cross. Marian Fisher, the true men on the Titanic, John Huss and many other martyrs throughout history have died valiant deaths, but none have tasted the death that Jesus died. They died with the hope of eternal life. For a while, from Gethsemane to the cross, Jesus was not able to imagine Himself living beyond the grave.

Satan with his fierce temptations wrung the heart of Jesus. The Saviour could not see through the portals of the tomb. Hope did not present to Him His coming forth from the grave a conqueror, or tell Him of the Father’s acceptance of the sacrifice. He feared that sin was so offensive to God that Their separation was to be eternal. Christ felt the anguish which the sinner will feel when mercy shall no longer plead for the guilty race. It was the sense of sin, bringing the Father’s wrath upon Him as man’s substitute, that made the cup He drank so bitter, and broke the heart of the Son of God. –Ellen White, Desire of Ages, page 753

Jesus used metaphors. So do we. They help us to illustrate our points in ways people can relate to. When we use metaphors and illustrations from everyday life, we show how practical Christianity is, and how it does not hide us in a monastery, but rather changes our behavior in everyday life. Jesus did not call Peter to stop fishing, but He changed the way Peter fished. His illustrations about the lost sheep may have changed the way some shepherds cared for their flocks.

I love golf and like to use golf illustrations and create metaphors so that other golfers can better understand the gospel. Occasionally I meet someone who has no hobbies or special interests, and this greatly limits their sphere of influence and their ability to connect with others. Golfing has broadened my sphere of influence as I have met many people on the golf course that I never would have met any other way. The game gives me practical illustrations of the Christian life so that I can relate the gospel to my friends on the golf course.

Still, as helpful as parables, metaphors and illustrations are, they still come short of the real thing. Jesus used metaphors, not as an end, but as an invitation to contemplate the reality of His love and sacrifice.

I remember as a boy being told a story about a mother who had scarred hands. One day her daughter asked her why her hands were so ugly. The mother explained that when the girl was just a baby, their home caught fire, and the mother burned her hands saving her. The daughter decided those are beautiful hands. The story ends with the comparison to Jesus’ hands being scarred when He died for us. Nice metaphor but it falls short! Jesus did not just get His hands scarred when He saved us. He felt abandoned by His Father when He cried out,

John the Baptist realized that metaphors fell short when He exclaimed,

Behold the Lamb of God, which taketh away the sin of the world. John 1:29

Hundreds of years before, a young boy climbing a mountain with his father, said something similar.

Behold the fire and the wood: but where is the lamb for a burnt offering? Genesis 22:7

What he was beholding was a metaphor. His father, Abraham referred to reality beyond the metaphor when he replied,

My son, God will provide himself a lamb for a burnt offering: Genesis 22:8

God not only provided a lamb for the sacrifice. He provided Himself to be that sacrifice!

In last quarter’s Sabbath School lessons, we talked about how only Jesus could be the sacrifice to atone for sin. Of course He had to be a perfect sacrifice without blemish, but beyond that the purpose of the cross is to heal us from sin. To do this, God had to restore our faith in His love. Satan had been spreading terrible lies about God, from the Garden of Eden to the halls of the Pharisees and Sadducees, trying to make God look stern, uncaring, and unloving. The cross heals our rebellion and lack of faith in God’s love, as God symbolically cries out from the cross, “Would you believe I love you if I die for you?”

No angel could atone for our sin of unbelief and rebellion. If God had sent an angel to die for us, it wouldn’t heal our doubts about His love. If He had said, “Would you believe I love you if I sent someone else to die for you?” that would not be love. That would just be throwing one of His created beings under the bus! The only way that God could cure our rebellion and sin of unbelief in His love, is if He died for us Himself! Saying I love you enough to die for you, means a lot more than saying I love you enough to send an angel to die for you. This is the sacrifice that heals our rebellious natures and makes us want to be Christ’s disciples, when we see that He loves us enough to die for His own creation. See John 1:1-3.

Metaphors and illustrations are great in leading us to the cross, but nothing will heal our hearts and minds like beholding the real thing—the cross itself.

It would be well for us to spend a thoughtful hour each day in contemplation of the life of Christ. We should take it point by point, and let the imagination grasp each scene, especially the closing ones. As we thus dwell upon His great sacrifice for us, our confidence in Him will be more constant, our love will be quickened, and we shall be more deeply imbued with His spirit. If we would be saved at last, we must learn the lesson of penitence and humiliation at the foot of the cross.  –Ellen White, Desire of Ages, Page 83.