↓
Home→Feature→God’s Mercy, Uzzah and the Ark

Many people think God was dealing harshly with Uzzah when he steadied the ark of the covenant, while it was being moved. But if we look carefully we will see God’s mercy even in His justice.

So they set the ark of God on a new cart, and brought it out of the house of Abinadab, which was on the hill; and Uzzah and Ahio, the sons of Abinadab, drove the new cart. 2 Samuel 6:3 NKJV

Do you already see a problem here? They are moving the ark on a cart. This is not how God instructed for it to be carried. That is how the Philistines moved it when they returned it. But how did God tell Israel to move the ark?

And the children of the Levites bore the ark of God on their shoulders, by its poles, as Moses had commanded according to the word of the Lord. 1 Chronicles 15:15 NKJV

The Israelites knew better than to carry the ark on a cart. They knew it was to be carried on two poles by the Levites. Now here is where we see God’s mercy and reasonable dealing. Earlier when the Philistines returned the ark, they put in on a cart, and let the oxen carry it back to the Israel camp. None of them were struck dead. God knew they did not know any better. God is always merciful when there is a lack of information and people are doing the best they can. The merciful God of the New Testament Who, “winked at” times of ignorance “but now commandeth all men everywhere to repent,” is the same merciful God of the Old Testament. God does not hold us accountable for things we do not know.

However Uzzah knew better and never should have agreed to move the ark on a cart to begin with. 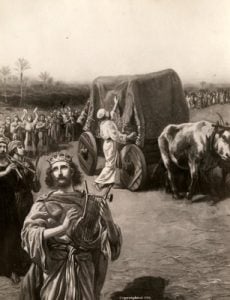 And when they came to Nachon’s threshing floor, Uzzah put forth his hand to the ark of God, and took hold of it; for the oxen shook it. And the anger of the Lord was kindled against Uzzah; and God smote him there for his error; and there he died by the ark of God. 2 Samuel 6:6-7 KJV

While God was merciful towards the Philistines who acted out of ignorance, but with good intention, God held Uzzah accountable. Uzzah made a mistake many make today. Instead of worshiping God according to God’s law, Uzzah thought he could imitate the world and worship God the way everyone else does. After all, what difference does it make if the ark is on a cart or two poles? Eve didn’t think it really mattered which tree she ate from. What was the big deal?

So many say today, what difference does a day make – Sunday or Saturday? A rest day is a rest day, right? Well apparently it did make a difference to God if it was a cart or a pole, just like it mattered which tree Eve ate from. And there is a difference between the seventh day and the first day.

Upon Uzzah rested the greater guilt of presumption. Transgression of God’s law had lessened his sense of its sacredness, and with unconfessed sins upon him he had, in face of the divine prohibition, presumed to touch the symbol of God’s presence. God can accept no partial obedience, no lax way of treating His commandments. By the judgment upon Uzzah He designed to impress upon all Israel the importance of giving strict heed to His requirements. Thus the death of that one man, by leading the people to repentance, might prevent the necessity of inflicting judgments upon thousands. –Ellen White, Patriarchs and Prophets, Page 706.

Now remember that, even though Moses had to die because of his sin, God was still merciful and gave him eternal life. I imagine that God’s mercy may still save Uzzah at the resurrection as well. So even this severe act of justice was a merciful act, leading many people to repentance so thousands may be saved as well.

Even when God is just, He is still merciful. In mercy God winks at the ignorance of the world. In mercy God gives us warning and opportunity to follow His instructions on how to worship Him, instead of worshiping the customs of the world.