As we saw yesterday, Babylon has a long history as the capital of false worship; so, it is a fitting symbol of an end-time power that deceives the nations. 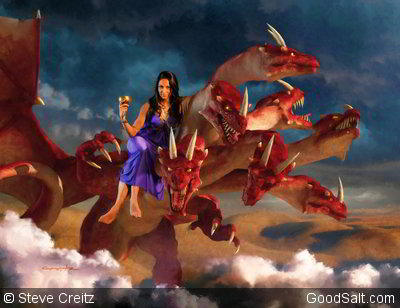 All three beasts have seven heads and ten horns, which represent the sum total of heads and horns of the beasts of Daniel chapter 7. Each successive empire was built upon those that went before. Similarly, the scarlet beast combines elements of the dragon and the sea beast (symbolizing pagan and papal Rome respectively), as well as of the land beast (Rev. 13:11-14) , grouping “all three powers — all of God’s enemies — into a real coalition”. — Jacques B. Doukhan, Secrets of Revelation, The Apocalypse Through Hebrew Eyes(Hagerstown, Md.: Review and Herald® Publishing Association, 2002), p. 162. An additional element in Revelation chapter 17 is the woman who rides on the scarlet beast, symbolizing an illicit union of religious and political powers. This woman contrasts sharply with the pure woman of Revelation chapter 12:

As “the Mother of Harlots”, Babylon has been busy reproducing itself. The apostate mother church has many apostate daughters. But God does not take ownership of the errors promulgated and atrocities committed by apostate Christianity. His true people, though attacked by Satan, survive through the centuries.

Revelation 14:8 has already warned people of Babylon’s fall or apostasy from the truth, which eventually leads to the final deception issuing in the mark of the beast (Rev. 14:9-11) . This warning will be repeated with much greater power, culminating in one last appeal for God’s people still in Babylon to come out of her and unite with God’s end-time remnant church (Rev. 18:1-4) .