↓
Home » Wednesday: No Other Gospel

Although Paul addresses all kinds of local challenges and problems in his letters to the churches, he still made it a practice to follow his opening greeting with a word of prayer or thanksgiving to God for the faith of his readers. 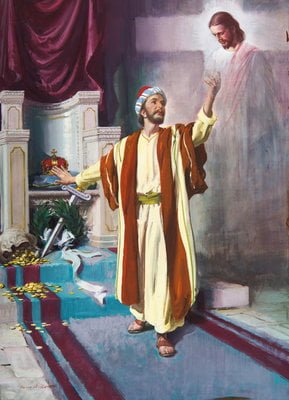 He even does this in his letters to the Corinthians, who were struggling with all kinds of questionable behavior (compare 1 Cor. 1:4 and 1 Cor. 5:1). The situation in Galatia is so upsetting, however, that Paul omits the thanksgiving entirely and gets right to the point.

What strong words does Paul use that demonstrate the degree of his concern about what was happening in Galatia? Read Gal. 1:6-9, Gal. 5:12.

Paul does not hold back any words in his accusation against the Galatians. Simply put, he charges them with betraying their calling as Christians. In fact, the word turning (NJKV), which appears in verse 6, often was used to describe soldiers who gave up their loyalty to their country by deserting the army. Spiritually speaking, Paul is saying that the Galatians were turncoats who were turning their backs on God.

How were the Galatians deserting God? By turning to a different gospel. Paul is not saying that there is more than one gospel but that there were some in the church who — by teaching that faith in Christ was not enough (Acts 15:1-5) — were acting as if there were another one. Paul is so upset by this distortion of the gospel that he desires that anyone who preaches a different gospel might fall under the curse of God! (Gal. 1:8). Paul is so emphatic about this point that he basically says the same thing twice (Gal. 1:9).