The Christian faith centers not only on the cross but on the empty tomb. The truth is, the majority of people in the world, including non-Christians, believe that a man named Jesus of Nazareth died on a cross. Not long after Jesus lived we find historical references such as this one from Tacitus, a Roman historian: “Nero … inflicted the most exquisite tortures on a class hated for their abominations, called Christians … by the populace. Christus, from whom the name had its origin, suffered the extreme penalty during the reign of Tiberius at the hands of one of our procurators, Pontius Pilatus.”—Tacitus, A.D. 57-117 (www.causeofjesusdeath.com/jesus-in-secular-history).

There’s little debate, then or now, about whether a historical figure named Jesus was condemned and crucified. 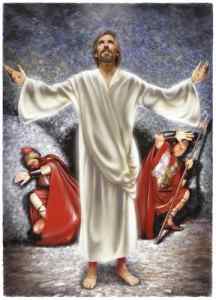 The hard part is the Resurrection: the idea that Jesus of Nazareth, who was dead on a Friday afternoon, became alive again on a Sunday morning. That is what many people struggle with. After all, a Jew crucified by the Romans in Judea was a fairly common occurrence. But a Jew raised from the dead after being crucified? That’s another matter entirely.

Yet, without this belief in a risen Jesus, we simply do not have a Christian faith. Paul wrote: “If Christ has not been raised, our preaching is useless and so is your faith … If only for this life we have hope in Christ, we are of all people most to be pitied” (1 Cor. 15:14, 1 Cor. 15:19, NIV). Jesus’ death itself had to be followed by His resurrection, because in His resurrection we have the surety of our own.

Read Matthew 28:1-15. Why does Jesus tell the women (in verse 9) to “rejoice” (NKJV)? Of course, they can be glad that He was resurrected, that their Master came back. But what is the real reason to rejoice at the resurrection of Jesus?