As we have seen, the war in heaven was not confined to heaven but affected the earth too. For some time it appears that Satan (the “accuser of our brethren, ” Rev. 12:10) was still able to stand before God’s throne and make accusations against God’s people. Job was one biblical character who suffered this indignity.

Read Luke 10:1-21. What was the meaning of Christ’s words about Satan here? 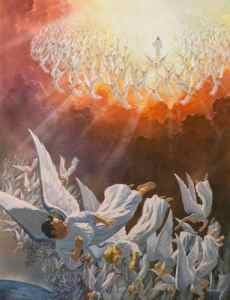 Before Jesus sent out the 70, He instructed them not to take any spare clothing or money (Luke 10:4) and to ask God’s blessing on their hosts (Luke 10:5) . He warned that they were like lambs walking among wolves (Luke 10:3) -a concern reflected in Revelation 12, where the dragon attempts to make war with God’s people.

On their joyous return (Luke 10:17) the disciples reported that the demons were subject to them, and this must have brought Jesus great joy (Luke 10:21) . It is in this context that Jesus makes His statement about Satan falling like lightning from heaven. He warns the disciples that their joy must not be based on their success over demonic forces but rather on having their names written in heaven (Luke 10:20) . This reminder places human salvation firmly where it belongs-in the hands of our Savior. It is Jesus, not we, who has defeated the enemy.

Jesus’ followers, however, are given the privilege of witnessing about the salvation Jesus has won. This episode in Luke 10:17-20 seems to link the work of witnessing that Jesus entrusts to His people with power over Satan in this great controversy. The work of witnessing erodes the power that Satan has over the people of this world and gives humankind opportunity to resume their original work of expanding the borders of God’s kingdom.

Power over our adversary is only possible because of the victory Jesus won at the cross. Paul states that Jesus “disarmed principalities and powers” and triumphed over them(Col. 2:15, NKJV) . In Him, God’s people are triumphant. Satan’s demise is assured. “‘The ruler of this world will be cast out’”(John 12:31, NKJV) , never to malign God’s people again. We can surely rejoice that the battle is the Lord’s!

“Rejoice, because your names are written in heaven.” Dwell on these words. What are they saying, and why is that such a great reason to rejoice?