↓
Home » Wednesday: A Slave in Egypt

In the book of Deuteronomy, one theme appears and reappears: that of the Lord’s redeeming His people Israel from the land of Egypt. Over and over, they are reminded of what God has done for them: “So the LORD brought us out of Egypt with a mighty hand and with an outstretched arm, with great terror and with signs and wonders” (Deuteronomy 26:8; see also Deuteronomy 16:1-6). 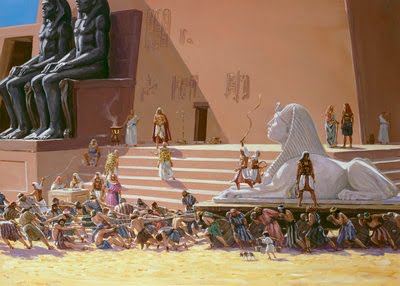 All through the Old Testament, in fact, the story of the Exodus has been referred to as an example of God’s mighty deliverance, by His grace, from the slavery and oppression of Egypt: “For I brought you up from the land of Egypt, I redeemed you from the house of bondage” (Micah 6:4).

Even in the New Testament, this idea appears, with the Exodus of Egypt by God’s great power a symbol of salvation by faith in Christ: “By faith they passed through the Red Sea as by dry land, whereas the Egyptians, attempting to do so, were drowned” (Hebrews 11:29; see also 1 Corinthians 10:1-4).

Read Deuteronomy 5:6-22, where Moses repeats the law, the Ten Commandments, the foundation stipulation of their covenant with Yahweh. Notice the fourth commandment and the reason given here for it. What is being said there that reveals the reality of law and grace?

Moses repeats the basic commandment to rest on the seventh-day Sabbath, but he gives it an added emphasis. That is, though it has been written in stone in Exodus, here Moses is expanding on what had already been given them. Keep the Sabbath, not only as a memorial of creation, but as a memorial of redemption from Egypt. God’s grace saved them from Egypt and offered them rest from their works (Hebrews 4:1-5). Now, in response to the grace God gave them, they needed to extend that grace to others.

In this case, then, the seventh-day Sabbath becomes not just a powerful symbol of creation but a powerful symbol of redemption and grace. Everyone in the household, not just the children, but the servants, the animals, and even the strangers among them, can rest. The Sabbath extends the grace given to the Jews to others, as well, even to those outside of the covenant people themselves. And it is found in the heart of God’s law. What God has graciously done for them, they need to do for others. It’s that simple.