A couple of years ago I attended the “Best Weigh” program at my church. While I wanted to lose a little weight I was not aware of just how much weight I really needed to lose. The doctor presenting the class pointed out that many people compare their weight to those around them, thinking since they are within the normal range of everyone else that they must be healthy. However, most Americans are overweight, and a third are obese. The majority of Americans are prime candidates for a heart attack. So, by making sure my weight fell within the norm of those around me, I was setting myself up for a heart attack! 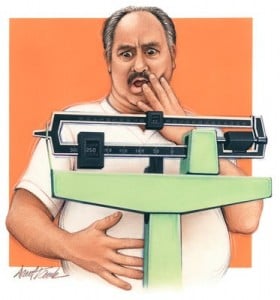 This week’s SS lesson mentions how people were so far away from God in Jeremiah’s day, while thinking their relationship with Him was perfectly fine. They were making the same mistake many make today. They looked around and found themselves within the norm, not realizing “the norm” is not to have a healthy relationship with God.

Let me share a quote I have not heard in a while, partly because it scares us and makes us uncomfortable. Didn’t a lot of Jeremiah’s counsel make people uncomfortable? Here it is,

It is a solemn statement that I make to the church, that not one in twenty whose names are registered upon the church books are prepared to close their earthly history, and would be as verily without God and without hope in the world as the common sinner. –Ellen White, Last Day Events, Page 172

Apparently the “norm” do not have a healthy relationship with God today, any more than in Jeremiah’s day.

It’s past time for us to stop looking around at how everyone else eats, exercises, dresses, spends the Sabbath, gives offerings, spends time in Bible study and prayer, and start comparing ourselves to the standard of God’s Word. The “norm” is not the standard. God’s Word is the standard.