↓
Home→Feature→What Makes My Country and My Church Strong 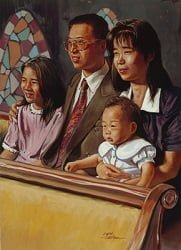 In my almost 50 years, I have seen leaders of my country come and go. Some were called good, some were called bad. There have been some fierce debates over whether or not certain leaders were good or bad.

Still my country remains strong. You know why I think that is? While some leaders are good and others not so good, I believe it is the common citizen who keeps my country strong.

Leaders may compromise their integrity for greed or political favor, but my country stays strong because of teachers like my second-grade teacher, Miss Tubbs, who stayed after school to help me finish my math assignment even though she really wanted to go home and was under no obligation to stay. I did not thank her for her extra effort. It made me resent her. She didn’t care that her extra effort was not endearing her to me. She wasn’t doing it for me to thank her. There was really nothing in it for her. Yet by going the extra mile she made each of her students a stronger link in the fabric of our country.

Then you have fathers like my dad, who, while working a full-time job and a couple part time jobs, volunteered at the city library to teach adults how to read. One of his pupils needed help moving, so Dad, who was already going the extra mile in just teaching him how to read, went another mile more, and helped him move. I never heard Dad complain about all he was doing and he still made time to take me to the baseball games. (He should have had me help his student move instead!)

This country has mothers like my mom, who kept the home in order, worked at various jobs off and on, and still volunteered to lead the Parent-Teacher Association, and was always there to give rides on our field trips. My mother taught me integrity with time, money and hard work. Growing up, Wednesday was the day we got to eat out, because that was the day the enchilada dinner was $1.00 off at the Monterey House Mexican Restaurant. Mom knew the value of saving a dollar, but she still had no problem waiting for the waitress to redo the ticket, after reminding her of something she forgot to charge us for.

This country is full of pastors like Pastor Kelly of the Highland Park Christian Church in Tulsa, where my family worked in the nursery for years. Since we were Seventh-day Adventists, we were Christians who were available to babysit while everyone else was in church on Sundays. During my teen years I sometimes needed a mentor to talk to who was not necessarily in the picture of my routine life at school, home or even my own church. While I was not a member of Pastor Kelly’s flock or even his denomination, and he knew good and well there was no chance I ever would be, he still made time for me and always returned my phone calls if I missed him. Just like my second-grade teacher, he went the extra mile even though there was nothing to gain for himself. He cared.

Then there is Eneida, who is now 20 and serving in the military getting ready to go to Afghanistan. She was 13 when I met her and her family. We all started studying the Bible together. I have watched Eneida give up things which were rightfully hers, so her younger siblings could have them instead. Being Hispanic, when it came time for her Quince, while her other friends were throwing big parties, she told her parents not to waste any money on her, and she enjoyed a quiet celebration with family instead. I have watched her caring for her younger siblings like a mother hen. Now she is in the military. At 20 years of age, the only life she knows is looking out for her family and country even at the expense of her own welfare. Her life has been full of sacrifices, none of which anyone else has ever asked her to make.

I think you get the picture: As long as my country has people like Miss Tubbs, Mom and Dad, Pastor Kelly and Eneida, I don’t think any political leader can destroy the strength of the common people who make our country strong. It’s not any one leader who is holding this country together and making it strong. The strength of this country is found in the millions and millions of everyday people, like the ones I have just mentioned.

So in my church, it is not any one leader who keeps it strong, even with all its challenges. Elijah was once tempted to think he was holding things together during a time of great spiritual crisis in Israel, when God reminded him of the 7,000 everyday people who had never bowed the knee to another any other god besides the true God. (See Romans 11:4 NLT) So while the king and queen of Israel worshiped Baal, Israel survived because of 7,000 everyday people whose names we don’t even know!

In Hezekiah’s day God’s people experienced a revival. The priests or leaders were not necessarily prepared for the revival the laity was experiencing.

So it is today, often the revivals are led by the lay members. Sometimes it is the lay members who lead the paid gospel workers back to God. I may be a paid full-time Bible Worker, but I can’t tell you how many times I have been educated, mentored, and, yes, even corrected by the most humble of lay members. During times of spiritual crisis it has been the common lay members who have held our church together. The grandmother praying through the night, the small child who quietly slips the money given to him for his birthday into the offering plate, fearing embarrassment if anyone was watching, the mother and father who were just cursed out after a board meeting, right in front of their children, who never retaliated, but went home and prayed in the family circle for the ones who cursed them. Yes, these are the people who revive and reform our church in times of crisis. These are the people who make our church strong.

The church will survive. It will be revived and reformed, not by any one leader. No. It will be revived and reformed by the 144,000. Literal number or symbolic, it’s all the same. God will not save, revive or reform his church through any one person. Like the days of Elijah, God will raise up a multitude of everyday common individuals who will reflect the character of God instead of themselves. And it’s because of my God, and His loyal, selfless, unpaid, unrecognized and un-thanked followers that my church is strong!