↓
Home » What was Really Wrong With Sinai?

For these are the two covenants: the one from Mount Sinai which gives birth to bondage, which is Hagar— Galatians 4:24 NKJV

Hagar represents the man-made covenant or man-made promises. Hagar was not really at fault, and God promised to bless her, but Abraham used Hagar to try to help him get the promised child by the works of his own flesh, instead of trusting God’s promise. 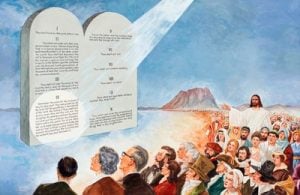 For if that first covenant had been faultless, then no place would have been sought for a second. Because finding fault with them, He says: “Behold, the days are coming, says the Lord, when I will make a new covenant with the house of Israel and with the house of Judah— not according to the covenant that I made with their fathers in the day when I took them by the hand to lead them out of the land of Egypt; because they did not continue in My covenant, and I disregarded them, says the Lord. For this is the covenant that I will make with the house of Israel after those days, says the Lord: I will put My laws in their mind and write them on their hearts; and I will be their God, and they shall be My people. Hebrews 8:7-10 NKJV

Paul promotes the Law and says it is to be written on our hearts. The Law was not the problem at Sinai. The problem, Paul says, is how the people tried to establish the Law. They were depending upon themselves instead of God’s promises. Remember Joshua telling Israel that they could not serve the Lord in Joshua 24:19, but they went on and promised they could anyway?

So Joshua said to the people, “You are witnesses against yourselves that you have chosen the Lord for yourselves, to serve Him.” Joshua 24:22 NKJV

Joshua sees the people are making the same mistake made at Sinai. In Galatians, Paul sees the Galatians making that same mistake. They thought they could earn God’s favor. They thought they could rely on their own promises to keep the Law. By trusting the strength of their own promises they were making the “Hagar” mistake, just like Abraham. The commandments are good, and while we can’t keep them in the strength of our own promises, what is impossible with us is possible with God. Remember what we read last quarter?

by which have been given to us exceedingly great and precious promises, that through these you may be partakers of the divine nature, having escaped the corruption that is in the world through lust. 2 Peter 1:4 NKJV

Abraham trusted the works of his own flesh with Hagar, instead of trusting God’s promise. The problem at Sinai was that the same Hagar mentality was present. Paul wants the Law written on the Galatians’ hearts as well as our hearts, by trusting God instead of the works of the flesh.