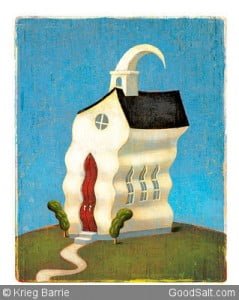 Have you seen it?  The head-bob and the eye-roll?  You, the adult, have just said something that your teen has deemed – uh, less than intelligent or, at least, not pertinent to his or her current life situation.  I hate to admit, though, that I have also performed that little operation as well.  Usually just in my head, though.

But what is it that makes “whatever” so incredibly infuriating?  Is it the palpable boredom? Apathy? Disdain? Disrespect?  The “I care so little about what you’re telling me that I can’t be bothered to argue about it” attitude?  All of the above?

I think that’s kind of Solomon’s attitude toward everything in the first chapter of Ecclesiastes.  “I did it all; I have it all; I know it all; and it’s all boring.” But how did Solomon get to that point? I mean, he knew God; he knew what God wanted from His people, and, somehow, it wasn’t enough.

Aren’t we, as Americans, in the same place as Solomon?  We have so much that we’ve become bored with everything.  We know what God wants from us, but we can’t be bothered to do it.  Apathy … the malady of the post-Christian world.

I heard the term “post-Christian” used several years ago.  I’m not sure I really understood what it meant at the time, just that it was describing “the modern age.”  But in the last couple of years, that term has popped into my mind more and more often. Then, when the boys and I went to Scotland last Thanksgiving, I really got it. Then I read several articles about what “post-christian” means to other people, and it was all pretty disturbing and sad.

I could really feel it in Scotland. We were surrounded by all of this history, these beautiful old castles, museums, and churches. The castles are protected and restored.  The museums carefully kept. But the churches are night clubs and movie theaters.  In one of the articles I read, I learned that less than 5% of the population of England attend church regularly. I couldn’t find the statistics for the US, but I hope we’ve got more than 5%!

Post-Christianity was mentioned in magazine articles in about 1962.  Imagine how much more post Christianity we are now!  According to Nathan Glazer,

“…religion has suffered crushing blows and plays a completely different role in the world today [1957] from that which it played only a hundred years ago.

“The great change is that hardly any significant number of people now interpret life in the terms proposed by the major religions. They no longer live for salvation, no matter how defined, but for life on this earth, in this world, interpreted in purely non-religious terms.” 1

There’s a big problem with that whole way of thinking, though. If we live for today only, like Solomon did for a while, and we no longer think in terms of salvation, then we have that “God-shaped-vacuum” that we, as humans, need to fill. Satan has an infinite number of substitutes that he wants us to try to fit into that vacuum.

One of the biggies is the New Age movement. Its focus essentially makes us become gods on our own. If we are our own gods, we can decide what is right and wrong for ourselves. That clears the way for moral relativism where even truth as an absolute is rejected.  Follow that trail, and we end up being our own lawgiver, priest, therapist and best friend.  Do we need anybody else at that point?  In one of the articles I read this week, I found this:

“Americans have adopted a therapeutic worldview which has transformed all issues of right and wrong into newly created categories of authenticity, self-esteem, codependencies, and various psychological fads which basically tell us that we are victims, not responsible moral agents.  A cult of self-worship has developed, substituting a search for the inner child in place of the worship of the transcendent God.” 2

We get all wrapped up in trying to fill the holes in our lives with anything we can find and trusting in our own power and wisdom. And that’s where we find Solomon in Ecclesiastes.  Ellen White says that Ecclesiastes “was written by Solomon in his old age, after he had fully proved that all the pleasures earth is able to give are empty and unsatisfying.  He there shows how impossible it is for the vanities of the world to meet the longings of the soul.” 3

Is it any wonder that Solomon sounds really depressed and fatalistic in Ecclesiastes?    He finally learned that without God, there really isn’t any point in anything.

Jesus is pleading with us, calling us back to the Father, reminding us of how much He loves us and all He’s done to save us.  He has tears in His eyes and nail scars in His hands and feet…  “O Jerusalem, Jerusalem, thou that killest the prophets, and stonest them which are sent unto thee, how often would I have gathered thy children together, even as a hen gathereth her chickens under her wings, and ye would not!”  Matthew 23:37

The cult of self-worship has come up empty. Post-modernism hasn’t been able to solve the ills of the world. Even post-moderns are beginning to feel an anxiety that is scarcely hidden by a careless “whatever.”

As we look around us, there really is only one solution – and that is the salvation that God so freely offers.

Whatever can we do to make that clear to those around us?