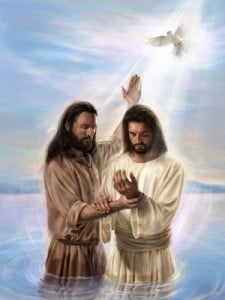 Did Jesus need to be baptized? Was He just setting a good example for us to follow, or was He actually repenting?

Suppose you are eating at your favorite restaurant, and the waiter spills the drinks all over you. I guarantee that the manager is going to come out and apologize all over the place. Why? The manager did not spill the drinks on you. No, but he belongs to a corporation that did. He is apologizing on behalf of the restaurant he represents. So with this mindset, we can say that Jesus was repenting when He was baptized. Not for His sins. He had no sin. But by making Himself one with humanity He was baptized and repented on behalf of humanity.

When Jesus came up out of the water the Father was heard saying,

This is My beloved Son, in whom I am well pleased. Matthew 3:17 NKJV

He made us accepted in the Beloved. Ephesians 1:6 NKJV

But the good news does not end there. What Jesus did for us He also wants to do through us.

Therefore we were buried with Him through baptism into death, that just as Christ was raised from the dead by the glory of the Father, even so we also should walk in newness of life. For if we have been united together in the likeness of His death, certainly we also shall be in the likeness of His resurrection, knowing this, that our old man was crucified with Him, that the body of sin might be done away with, that we should no longer be slaves of sin. Romans 6:4-6 NKJV

By baptism we die to self just like Jesus died to self. As Jesus was raised from the grave we are raised to a new life, and now Paul says that God,

raised us up together, and made us sit together in the heavenly places in Christ Jesus. Ephesians 2:6 NKJV