I love to think of those first days in Heaven. I try to imagine the wonder of seeing my Bible heroes visiting with people of every age. It will be so exciting to have the opportunity to go back over our earthly experiences with our guardian angels. That’s all going to be amazing and, I believe, will never lose their excitement. But let’s imagine just for a few minutes, that as you’re walking past the Tree of Life and you see Stephen and Saul/Paul walking toward one another. You see the spark of recognition on their faces as they recognize each other…and then you see something else. 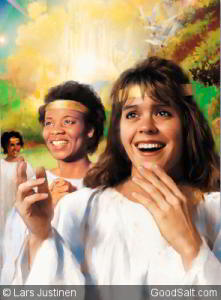 Remember that the last time Stephen saw Saul was the day that Saul held the cloaks of the folks who stoned Stephen. He missed the whole Damascus Road conversion bit. What thoughts do you think are going through Stephen’s mind at the moment he recognizes Saul?

Not too much later you’re strolling around, just enjoying the scenery and you come face to face with the grown-up version of that kid who stole your lunch money every single day of your third grade year? What if you see that cranky old man who lived at the end of your street who was always calling and complaining to the city the instant your grass got a millimeter too long, or that professor who seemed to take great joy in humiliating any student who was brave or silly enough to admit to being a Christian? What if you look around Heaven and you see people that you think of as completely evil – Kim Jong Il, Idi Amin, or Saddam Hussein?

At the same time, you look around and see some noticeable absences. Where’s that teacher who seemed to know all the answers to your spiritual questions? or that man who greeted every person who walked through the door of the church with a smile and big handshake? Why haven’t you run into that kid who won the Bible Bowl three years running; he knew his Bible forward and backward!?

It’s not hard to imagine, then, that if you have questions like that, other people will too. And from there it’s a very small step to thoughts of God playing favorites or being arbitrary and unfair … and then we’re right back where we started, and the whole seven thousand years of the great controversy has been a complete waste of time.

“During the thousand years between the first and the second resurrection the judgment of the wicked takes place. The apostle Paul points to this judgment as an event that follows the second advent. ‘Judge nothing before the time, until the Lord come, who both will bring to light the hidden things of darkness, and will make manifest the counsels of the hearts.’ 1 Corinthians 4:5.

“Daniel declares that when the Ancient of Days came, ‘judgment was given to the saints of the Most High.’ Daniel 7:22.

“At this time the righteous reign as kings and priests unto God. John in the Revelation says: ‘I saw thrones, and they sat upon them, and judgment was given unto them.’ ‘They shall be priests of God and of Christ, and shall reign with Him a thousand years.’ Revelation 20:4, 6.
“It is at this time that, as foretold by Paul, ‘the saints shall judge the world.’ 1 Corinthians 6:2. In union with Christ they judge the wicked, comparing their acts with the statute book, the Bible, and deciding every case according to the deeds done in the body. Then the portion which the wicked must suffer is meted out, according to their works; and it is recorded against their names in the book of death.
“Satan also and evil angels are judged by Christ and His people.” (E.G. White, The Great Controversy, 660, 661)

Isn’t God good? There won’t be any, “Because I said so!” coming from God. Instead He will open all of His books and records to us. Talk about transparency!

We will have the opportunity – the responsibility, of going through God’s records and seeing for ourselves that God is the epitome of fairness. We will have the chance to review every second of every person’ life and see their walk toward or away from God.

We will have the opportunity to see the evidence of God’s love for His creatures and His complete freedom of choice – allowing each one of us to choose to walk away from Him.

It’ll be like a heavenly audit carried out by the redeemed. And at the end of the thousand years, no one will ever be able to doubt the motives of or second guess the fairness and love of Jesus. There will never be another question about what kind of God we have served and with whom we’re fixing to spend eternity. By the end of the Millennium God will finally be able to wipe away every tear from our eyes and we will have the assurance that doubt will never invade our thoughts.

Even better, the other created beings will see once and for all see that Satan’s claims against God are false and without basis of any kind. God’s character will have finally been cleared.

I think that text includes God too. He will be able to put behind Him the heartbreak of having to allow people who He created to choose someone or something else.

“For God so greatly loved and dearly prized the world that He [even] gave up His only begotten (unique) Son, so that whoever believes in (trusts in, clings to, relies on) Him shall not perish (come to destruction, be lost) but have eternal (everlasting) life. For God did not send the Son into the world in order to judge (to reject, to condemn, to pass sentence on) the world, but that the world might find salvation and be made safe and sound through Him.” John 3:16-17

I love to think about spending eternity with Jesus, don’t you?