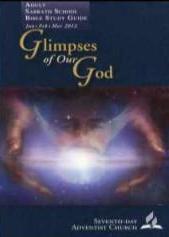 Who can look at those photos from the Hubble Space Telescope and not marvel at the beauty of the cosmos? Astonished at the famous photo of the “Sombrero Galaxy,” one writer said: “How can we begin to fathom the knowledge, the power, the reasoning, the truths, and the purposes that went into the Sombrero Galaxy (which is just one among billions of others)? Here we are, so small and so isolated, a speck of the creation with so much in our view but so infinitely beyond our grasp.”

Of course, as Seventh-day Adventists, the God whom we worship and serve is the One who, indeed, has made the universe—everything from the Sombrero Galaxy to the quarks that compose all matter in it and everywhere else, as well.

The picture of God in the Bible is very expansive. Yes, God’s love is underscored, over and over again, but there is so much more about Him that He wants us to know. For example, there are hundreds of different names for God in Scripture. Each one of them could give a deeper and more informed understanding of the great God of heaven and earth. He is so much more than a benign Santa Claus in the sky who doles out assistance at our request. (A professional poker player recently won millions of dollars in a tournament, and then publicly thanked Jesus for it!)

This quarter we’re going to look at God, at various aspects of Him as they have been revealed to us and at what these things mean for us on a practical level. We’re going to start with some of the “basics,” such as the Trinity—the amazing teaching that God is One God and yet composed of three Persons. From there, we’re going to focus on God as Creator, the doctrine that forms the foundation of all that we believe. Next, we’ll look at His work of redemption, because in a fallen world being created isn’t enough. We need to be redeemed, as well. We’ll also look at God as both a God of grace and a God of judgment. We’ll then look at His holiness, His law, and the Sabbath, all of which stem from the essence of His character and help us understand more about what He is like.

And we also are going to look at some other aspects of God not commonly thought of, such as God as a God of beauty, of history, and even of romance. Among other things, such as prayer and ecology (that is, we want to look at some of the practical aspects of what it means to serve our Lord), we’re going to look, too, at God’s great promise of the Second Coming, which leads to the climax of history and the end of humanity’s horrible experience with sin.

God is big (after all, He created—along with everything else—the Sombrero Galaxy!). We are so small in contrast. How grateful we should be, then, for every bit of light He casts our way. This quarter we’ll look at some of that light. It’s up to each of us, individually, as to how faithfully we walk in it.

You can find a video segment from a sermon by Professor Davidson on the Adventist Preaching Web site. The sermon is entitled “Signs of Hope: Looking Forward to the Second Coming”

Copyright © 2012 by the
Office of the Adult Bible Study Guide, General Conference of
Seventh-day Adventist. All Rights Reserved.