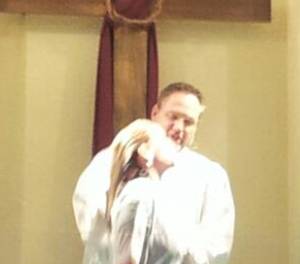 Have you ever gotten home from work but you don’t remember driving there? You’re on auto-pilot. It happens whenever we’ve done something so many times that our brain doesn’t really have to engage in what we’re doing to make it happen. It’s almost like our muscles just take over – tying our shoes, playing a musical instrument, typing.

You can probably think of lots of things that have become like that for you. You’ve seen, or maybe you are one of those folks who can knit or crochet so well that you don’t need to see what you’re doing. I used to wear contact lenses and sometimes I’d wake up in the night and not be able to remember if I’d taken my contacts off or not. Of course it was easy to find out – if I could see more than a foot away, then I needed to get up and take them out.

Anyway, being on auto-pilot is not necessarily a bad thing. Imagine if we had to think about every step we took, everywhere we walked? There was a time when most of us had to think of how to form every letter and how to spell every word when we wrote things down. But when we write something now, our hands pretty much know what to do without our help.

Being on auto-pilot isn’t necessarily a good thing either. Some folks, who’ve been married a really long time can say “I love you” without really thinking about it. Sometimes they might be talking to someone besides their spouse on the phone and they’ll end the conversation with “I love you,” but the person on the phone is a business associate instead of their spouse. That can be pretty awkward.

Sometimes our worship can become so automatic that our brain disengages from it and we find ourselves just going through the motions. We go to church, stand up, sit down and kneel at all the right times, but we’re not actually involved in the worship service beyond just being a warm body sitting in the pew. We’re just there because it’s become a habit – just another thing we do in our lives.

Going through the motions can be particularly tragic when we’re talking about some of the really meaningful ceremonies of our worship service – baptism, foot-washing, and communion.

I know, I can hear you, “Hey, how can baptism become routine, I only do that once.” And you’re right, but sometimes our on-going experience of having been baptized can become stale. Remember how the church at Ephesus was described in Revelation?

“I know thy works, and thy labour, and thy patience, and how thou canst not bear them which are evil: and thou hast tried them which say they are apostles, and are not, and hast found them liars: And hast borne, and hast patience, and for my name’s sake hast laboured, and hast not fainted. Nevertheless I have somewhat against thee, because thou hast left thy first love.” Revelation 2:2-4
See? They were doing all the right things, but they were just going through the motions. The instructions for resolving that problem come in verse 5: “Remember therefore from whence thou art fallen, and repent, and do the first works; or else I will come unto thee quickly, and will remove thy candlestick out of his place, except thou repent.” Revelation 2:5

Jesus also left us with a reminder of baptism to keep the experience more fixed in our minds. Just before the Last Supper, when He gathered with all 12 of the disciples in the upper room.

“Jesus knowing that the Father had given all things into his hands, and that he was come from God, and went to God; He riseth from supper, and laid aside his garments; and took a towel, and girded himself. After that he poureth water into a bason, and began to wash the disciples’ feet, and to wipe them with the towel wherewith he was girded. Then cometh he to Simon Peter: and Peter saith unto him, Lord, dost thou wash my feet? Jesus answered and said unto him, What I do thou knowest not now; but thou shalt know hereafter Peter saith unto him, Thou shalt never wash my feet. Jesus answered him, If I wash thee not, thou hast no part with me. Simon Peter saith unto him, Lord, not my feet only, but also my hands and my head. Jesus saith to him, He that is washed needeth not save to wash his feet, but is clean every whit: and ye are clean, but not all. For he knew who should betray him; therefore said he, Ye are not all clean. So after he had washed their feet, and had taken his garments, and was set down again, he said unto them, Know ye what I have done to you?” John 13:3-12

In many parts of the world, humility is almost a bad word. The enemy’s message is that we should make sure we get what we ‘deserve’ and not let anyone take it away from us. Television shows, magazines and self-help books all encourage us to believe in ourselves and take our places at the top of the ‘food chain.’

This last Friday was what American’s call “Black Friday” because it’s supposedly the day on which most businesses move from losing money to making money for their fiscal year. Whatever the businesses call it, however, for the consumer it is a day to get in the front of the line and get the best stuff. Watching videos of the melees that happened at many of the stores when they opened for business on Black Friday was absolutely horrifying – people actually pushing down doors and other people to be the first to get their chosen merchandise – actually scuffling with other customers over certain items. In past years people have actually been injured or killed in the stampede.

Fewer and fewer people are willing to stand aside and let a stranger step ahead. The thought of kneeling before another person, for any reason, would seem demeaning to many, never mind kneeling to wash the feet of that other person.

Jesus, who could have demanded that someone wash His feet, who could have sent one of the disciples out to find a slave to do the job, who could have berated the disciples for not taking the initiative to do it themselves, quietly stood, filled a basin with water, grabbed a towel and started washing the feet of His best friends, because it needed to be done. He didn’t slam things around and mumble about how if nobody else was going to do it, He guessed He’d have to. He washed the disciples’ feet because He loved them and He knew they still didn’t understand the whole “if you want to be first, you have to be last” thing.

I believe the hardest part of foot washing for the disciples was that it was a job that was important but was supposed to be done by someone else – someone who had no place in polite society. It was a dirty and distasteful job that nobody would choose to do of their own free will. The hardest part of foot washing for us is that it’s too easy – nobody shows up having walked all day in the dust in sandals. Of all the things we do in our Christian experience, the Ordinance of Humility is the one I believe we are most guilty of just going through the motions. We forget that it symbolizes the great sacrifices that Jesus made to cover our sins and make it possible for us to live with Him for eternity.

Next time the Ordinance of Humility is scheduled at your church, first, don’t skip church that week. Second, take some extra time to think about what it means to serve those around us in the way that Jesus served (and serves). Third, ask Jesus to show you what service He has for you. And fourth, do it with your whole heart and mind engaged. Don’t let auto-pilot to take away the blessings of real, humble service.

‎”Our world is so twisted and perverted by sin that it has it all backward, however ‘rational’ and ‘sensible’ backward may seem. Who in his or her right mind would rather be the one serving than the one served? Is not the whole point of life to get ahead to become wealthy, and to be someone who is waited on and attended to by others rather than being one who serves? It’s no wonder, then, that at the Last Supper, Jesus washed the disciples’ feet. No words He could have said would have conveyed the truth of what real greatness is in the eyes of God more forcefully than His washing the feet of those who should have been kissing His feet.”1

“There is in man a disposition to esteem himself more highly than his brother, to work for self, to seek the highest place; and often this results in evil surmisings and bitterness of spirit. The ordinance [foot washing] preceding the Lord’s Supper is to clear away these misunderstandings, to bring man out of his selfishness, down from his stilts of self-exaltation, to the humility of heart that will lead him to serve his brother.
“The Holy Watcher from heaven is present at this season to make it one of soul searching, of conviction of sin, and of the blessed assurance of sins forgiven. Christ in the fullness of His grace is there to change the current of the thoughts that have been running in selfish channels. The Holy Spirit quickens the sensibilities of those who follow the example of their Lord.
“As the Saviour’s humiliation for us is remembered, thought links with thought; a chain of memories is called up, memories of God’s great goodness and of the favor and tenderness of earthly friends. Blessings forgotten, mercies abused, kindnesses slighted, are called to mind. Roots of bitterness that have crowded out the precious plant of love are made manifest. Defects of character, neglect of duties, ingratitude to God, coldness toward our brethren, are called to remembrance. Sin is seen in the light in which God views it. Our thoughts are not thoughts of self-complacency but of severe self-censure and humiliation. The mind is energized to break down every barrier that has caused alienation. Evil-thinking and evilspeaking are put away. Sins are confessed, they are forgiven. The subduing grace of Christ comes into the soul, and the love of Christ draws hearts together in a blessed unity.” (E.G. White, The Desire of Ages, p 650-651)

On that same evening, in that same upper room, Jesus also gave us Communion.

“And as they were eating, Jesus took bread, and blessed it, and brake it, and gave it to the disciples, and said, Take, eat; this is my body. And he took the cup, and gave thanks, and gave it to them, saying, Drink ye all of it; For this is my blood of the new testament, which is shed for many for the remission of sins. But I say unto you, I will not drink henceforth of this fruit of the vine, until that day when I drink it new with you in my Father’s kingdom.” Matthew 26:26-29

Isn’t that an amazing promise – “I will not drink henceforth of this fruit of the vine, until that day when I drink it new with you in my Father’s kingdom.” We will be with Him in the kingdom!

Let’s not let baptism, the Ordinance of Humility and the communion service become one more case of auto-pilot. Stay focused!