“Mom! Dad! Where’s everybody?” Ariston let his sandals clack against the hard surface of the walkway as he dashed through the Thessalonian house where he lived with his family. 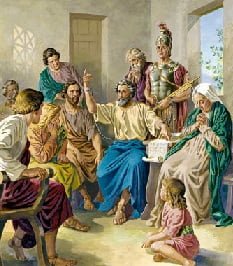 “Over here!” His mother called from the corner of the house where she was mixing dough for flat bread. “What is so urgent?”

“Can I go see Paul?” Ariston was breathing hard. He crossed his legs and held out his hands to his mother as he sat on the hard dirt-paved floor.

“Paul? You mean that worthless Roman who is wandering around everywhere?”

“Just as bad. So what makes you so eager to see Paul? What is he preaching now?”

“He’s talking about Jesus and the wonderful freedom we can obtain from Him as our Saviour. He’s just a few buildings from here, Mom, and there’s still room in that empty lot. Come. I’ll show you.”

Ariston and his mother found their way to the meeting in progress, and Mom listened intently for three hours, fascinated by what she heard. “This is what we need,” she whispered to Ariston. “I want to be baptized.” She turned to her son as if asking him a question.

Papa wasn’t so easily convinced. He was nervous about Roman powers settling into Thessolanica, and if Paul was a Roman as he said he was, what harm might he bring to his family and other Greeks who opposed Rome? And yet, one by one members of Ariston’s family listened to Paul and his followers, and Papa joined them. One by one in the days to follow, Papa and his family gave their hearts to Jesus and became Christians. Why? “Because Jesus loves me no matter what my race or background,” Papa said. And it was so.

1. Political complications. What do you think it was like belonging to a Greek family and living in a city state that was technically ruled by Rome? Do you think we have an overly harsh picture of the Roman government in those days and that sometimes Roman rulers were kind and thoughtful? What makes you think so? or think not? Are the poor always the ones most oppressed when a new autocratic government takes over? If we follow Paul’s example, what will we do when we learn about political upheaval and dominance where we live?

2. A pagan response. At this point your lesson includes five paragraphs explaining the uprising of the Cabirus Cult, the murder of its leader, and the posthumous worship of Cabirus as a martyr. What effect did these events have on Christians in Thessolanica? How clever was it of the Roman rulers to say, “Don’t expect Cabirus in the future. He’s already here. His name is Caesar.” How would you feel if you were deprived of your only source of spiritual comfort? What was the only way to fill the resulting vacuum in the hearts of Christians in Thessalonica?

3. The gospel opens doors. The lesson author isn’t sure, and neither am I, but what could make you think that perhaps Paul knew about Cabirus before he came to Thessalonica? Would it have been better if Paul had started talking about Cabirus rather than opening his first speeches with words about the gospel of Christ? Instead of finding everything possible wrong with Cabirus and his believers, what did Paul do? Does the gospel meet your needs as it did the needs of the Thessalonians long ago? How can Paul’s approach help us reach out to others we want to introduce to the gospel of Jesus?

4. The street preachers. Would it be fun to set up a make-believe pulpit at a busy corner in your town and start preaching? Instead of that, what places or activities are available to us today where we can launch the gospel message? What can your church do to widen the Christian influence of your members in your community? Are there a lot of poor or disadvantaged peope that need a Christian witness? Can we make friends with neighbors? Can your job be directed in any way towards showing others the grace and peace God gives you?

5. Home churches. What do you think about using home churches today? Are people more likely to come to your church or to your home to worship or learn about the gospel? Or do most of the people in your community already know about–and believe–the gospel? Have you ever been involved in building a new church for members? In what ways is a dedicated structure superior as a house of worship rather than a home? Has God been able to show you opportunities this week to show friendship and Christian love to others where you live? Will He, if you ask Him?

6. The war against heathenism. Are there still people alive today who worship pagan gods or the dead? Would Satan’s strategy be improved if he were to impress people to build worship structures in honor of him? Why doesn’t he do that? Or doeshe? Do you think there will be people in heaven who have never heard the name of Jesus? If so, what will save them? Give two or three reasons why a home church could be the best idea for a local group of members. Are times today as challenging to our church as they were in the first century to the very first Christian churches? Discuss.