On that darkest of all Sabbath nights, Mary cannot sleep. Faith and despair wage a battle in her mind. The numbness of despair threatens to swallow her faith. She has gone through some bad times before, but none like this. 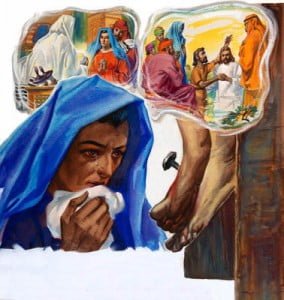 She recalls her out-of-wedlock pregnancy and how the neighbors glanced at her and stopped talking when she came near. She knew that her pregnancy was not of human origin, but she had had to keep the vision of the angel Gabriel in her mind to bolster her courage. She had been so young. The angel had mentioned her cousin Elizabeth, and she had traveled the 209 kilometers1 to see Elizabeth as soon after the angel’s visit as she could. Ah, yes, God had been good! He had corroborated the words of the angel through the prophecy of Elizabeth. And her own soul had been lifted up in joyous expectation of the Messiah. That had been a day of glory.

After three months of blessed time with Elizabeth, she had had to return home. And she had to tell Joseph about the pregnancy. Good, honest Joseph had seemed distraught, unable to believe the angel story, and he had wanted to break the betrothal quietly. That was a dark day and night. But then the angel had come through for her. He had appeared to Joseph as well, and they were married sooner than planned. Of course people talked when her pregnancy became obvious. But Joseph had been her rock. How much she had needed him!

Then there was the time she and Joseph had had to journey the 130 kilometers2 to Bethlehem to pay their taxes and be counted in their city of birth. She had been afraid to travel so near her time of delivery. But they remembered that the Messiah was to be born in Bethlehem. Surely God would take them there. Joseph had been so kind. He had let her ride his donkey and comforted her through the early labor pains. The five inns in which they had slept along the way had been busy, but then they came to Bethlehem. By this time, her contractions were but minutes apart. She knew the baby would come very soon. The tiny town had but one inn, and it was filled. The best the inn keeper could do was to offer them a place in the stable cave. Was this where the Messiah would be born? The stable was dark and redolent of animals and their manure, and her spirits were nearly as dark at the prospect of delivering a child in this filthy cave. But Joseph had found a bit of clean straw and she had no more time to reflect on their circumstances before her labor began in earnest. Joseph had acted as midwife. In spite of the surroundings, her heart sang as she drew the tiny baby to her breath. But her questioning thoughts had returned. Had God forgotten them?

A commotion outside the stable had interrupted her thoughts. A half a dozen or so shepherds crowded into the stable with their lamps. They were bursting with the story of an angel who told them of the Baby and then a sky filled with angels singing, “Glory to God in the highest! Peace and good will towards men!” The shepherds could not stop talking, and she hungrily treasured every word. These words helped sustain her through the unsettled time of the next year or so in Bethlehem. And so did the words of Anna and the prophet Simeon who had called her baby, “A light to bring revelation to the Gentiles and the glory to Your people Israel.” Luke 2:32

Now Mary understands the mysterious words of Simeon that “a sword will pierce through your own soul also.” She feels the sword twisting in her soul.

But then came the richly robed astrologers from Persia, bringing costly gifts fit for a king. Another reminder from God as to Who this Child really was. Again her soul drank in the story of a guiding star – right to their house. But her joyous contentment did not last long. They didn’t even have time to figure out what to do with the gifts before it became obvious. The angel had appeared again – this time to warn them to flee to Egypt because the king was looking to kill the Child. That was a long trip, but she was in better shape then, and she walked many of the 100 or so miles to the Jewish settlement just inside Egypt’s border while the donkey carried Joseph’s tools and the child.

Mary notes that there are murmurs throughout the house where other disciples are gathered. Apparently no one else is sleeping either. She joins a group as they recall the miracles of Jesus. He healed lepers, raised the dead and created food for thousands from but five small barley loaves and three fish. He had entered Jerusalem on a young foal, just as the prophecies said the Messiah would do. But just a few days later, He was arrested in Gethsemane, and He allowed himself to be flogged and mocked, with not a word in reply. And then He was crucified as a common criminal!

Why would He not deliver Himself, as the taunting crowd challenged him to do?! Their minds are all full of questions, But mostly they just all miss Him. Their lives had revolved around Him. And now He is gone! Buried in the fine tomb of the rich Joseph of Arimathea, but buried nevertheless. They weep together, with their arms around each other. They honor her as the mother of the Master, but it does not dispel her sorrow. The night is dark.

Before the morning comes, some of the younger women leave to anoint his body. From not sleeping since Thursday night, Mary is too exhausted to go. She is glad the women are going. She lies down on a cot and falls into a fitful sleep. 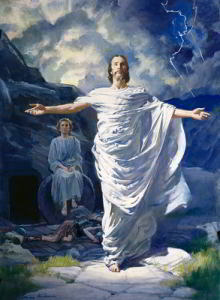 “He is risen!” She hears the shout in her dream. But she is not dreaming now. She is awake! A commotion of voices, including, “He is risen!” fills the house. Then she sees Mary Magdalene. Radiant. She simply says, “I have seen the Lord.” One look at her confirms the message, her Son, Jesus Christ is risen from the dead!

Mary Magdalene relates the details of her encounter in the garden. And Mary again recalls the words of the Angel Gabriel, the words of Anna the prophetess and Simeon the prophet. And her son’s own words saying that He would rise again. His words, “Before Abraham was, I AM”

Joy and faith displace the despair in Mary’s heart. She knows that she, too, will see Him again. Reverently she repeats the words of her song from more than 30 years ago:

“My soul magnifies the Lord,
And my spirit has rejoiced in God my Savior.
For He has regarded the lowly state of His maidservant;
For behold, henceforth all generations will call me blessed.
For He who is mighty has done great things for me,
And holy is His name.
And His mercy is on those who fear Him
From generation to generation.
He has shown strength with His arm;
He has scattered the proud in the imagination of their hearts.
He has put down the mighty from their thrones,
And exalted the lowly.
He has filled the hungry with good things,
And the rich He has sent away empty.
He has helped His servant Israel,
In remembrance of His mercy,
As He spoke to our fathers,
To Abraham and to his seed forever.” (Luke 1:46-55 NKJV)

As she sees her Son in her mind’s eye, Mary whispers reverently, “My Lord and my God!” The Messiah has come. He lived as Jesus Christ and He died on a Roman cross.

The dark night is over, and the Sun shines in its brilliance. Jesus lives again as the Savior of the world and the great I AM. As the prophet said, He will rise above the nations as the Sun of Righteousness with healing in His wings. (Mal 4:2)