↓
Home→Feature→Michael, My Savior and Rescuer

Recently I was studying with a man who believed Jesus was a really good person, even a savior who died for us, but he did not believe Jesus was God. I shared with him the importance of knowing Jesus was actually God. I asked him, “If your wife was trapped inside a burning building, which would convince her more that you love her? Sending a fireman in to rescue her or going in yourself to rescue her?” He replied, “Going in myself.”

God the Son shows His love for us by dying Himself to rescue us.

In Daniel 10, Daniel is in a fierce spiritual battle when finally,

Michael, one of the chief princes, came to help me. Daniel 10:13 NKJV

In Daniel’s time of need did God send someone else to rescue Daniel, or did He demonstrate His love by rescuing Daniel Himself?

It’s easy for some to conclude, on surface reading, that Michael is just another angel. But as we look deeper, we see that Michael is actually the Son of God, who became incarnate as “Jesus,” coming to our rescue.

Archangel is a compound of two Greek words: “arche” which means beginning or commencement, and “aggelos” which means angel or messenger. The word arche is also closely related to the word “archo,” which means “to be first” or to “reign (rule) over.” Thus the “Archangel” is the One who began (created) the angels and reigns over them. That would be none other than Christ.

Bible scholars are in general agreement that an “archangel” is over the created angels. But not all agree that the Archangel is the Creator Himself.

Let’s look at a similar passage in which Christ is called the “beginning” of the creation of God:

“And unto the angel of the church of the Laodiceans write; These things saith the Amen, the faithful and true witness, the beginning of the creation of God.” (Rev 3:14)

In this text “arche” is translated as “beginning.” Is it not reasonable to conclude that since to all the other churches, the One speaking is Christ Himself, this is clearly another description of Christ. Thus, it appears that in biblical usage, the “arch-creation” or “beginning of creation” means the Creator Himself.

Thus from the word usage, we could conclude that the “archangel” is also the Creator of the angels and not one of the created angels.

The name Michael means “One like God” or “There is no one else like God.” If Michael were only a created angel, then Lucifer’s aspiration to be “like God” could not be blasphemous and a reason for his expulsion from heaven. (See Isaiah 14:14.)

In Revelation 19:10 John starts to worship an angel and the angel tells him not to. Obviously this was a created angel who realized there was no way he, a created being could be equal with God. However, in Joshua 5, Joshua meets an Angel who accepts his worship, demonstrating that this was not a created angel, but the Angel who led Israel in the wilderness, referred to in Exodus 23:20-21:

Behold, I send an Angel before thee, to keep thee in the way, and to bring thee into the place which I have prepared. Beware of him, and obey his voice, provoke him not; for he will not pardon your transgressions: for my name is in him.

So how do we know in the Bible that Michael is the Son of God, now known as Jesus?

For unto us a Child is born, Unto us a Son is given….. And His name will be called…. Prince of Peace. Isaiah 9:6 NKJV

Who did Jude 1:9 say raises the dead?

Yet Michael the archangel, when contending with the devil he disputed about the body of Moses, durst not bring against him a railing accusation, but said, The Lord rebuke thee. Jude 1:9

When Jesus comes, who raises the dead?

For the Lord Himself will descend from heaven with a shout, with the voice of an archangel, and with the trumpet of God. And the dead in Christ will rise first. 1 Thessalonians 4:16 1 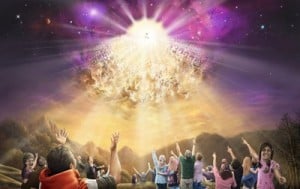 It is the Lord Himself who has the voice of the archangel. The same voice that Jesus said would raise the dead.

Most assuredly, I say to you, the hour is coming, and now is, when the dead will hear the voice of the Son of God; and those who hear will live. John 5:25

While Michael rescued Daniel during his time of need, who will rescue us during our time of trouble?

“And at that time shall Michael stand up, the great prince which standeth for the children of thy people: and there shall be a time of trouble, such as never was since there was a nation [even] to that same time: and at that time thy people shall be delivered, every one that shall be found written in the book. And many of them that sleep in the dust of the earth shall awake…..” Daniel 12:1-2

Michael, the Son of God Himself will come to our rescue! How assuring to know that God loves us too much to let someone else save and rescue us! He rescues us Himself! Yes God also send angels both terrestrial and celestial to help us in our time of needs, but He also loves us so much that He will finally come rescue all His people Himself!

Daniel 10 gives me comfort that, in my time of need, when I feel I am being overcome by Satan, I can cry out God, “Please send Michael!” And Michael, the Only one “like Unto God,” Yes God Himself will rescue me!

Are you in the middle of a spiritual warfare now, and feel like you are losing the battle? Don’t wait. Call for Michael, the Son of God Himself, now!