We humans are a funny bunch. We love to talk about fairness and justice and everybody getting what they deserve – just as long as we get to decide just what that means. 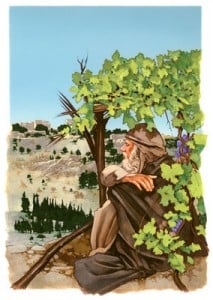 Jonah is a prime example. God tells Jonah to go to Nineveh and tell the folks there that if they don’t make some big changes, He’s going to destroy the whole place. Jonah’s response is to hop on a ship going as far in the other direction as possible. Why? Because he’s afraid to give them the bad news? Nope, because he knows that if the Ninevites actually do repent and change things around, God won’t punish them.

Huh. Why do you think Jonah was so anti-Ninevite?

The Bible doesn’t tell us much about it. Did a bully from Nineveh beat Jonah up and take away his lunch money every day? Did he get his heart broken by a Ninevite girl? Whatever it was, Jonah wanted them to get the punishment he thought they deserved – whether or not they repented.

Part of it may have been just plain, old-fashioned bigotry – those folks from Nineveh weren’t like the people around whom Jonah grew up. He didn’t know anything about them except what he’d heard – and what he’d heard was all bad.
Does that kind of prejudice affect the way we decide today who gets the chance to hear about salvation and who doesn’t? Do we have prejudices grown out of ignorance or past experiences that keep us from exposing certain groups of people to God’s mercy?

Harvard has put out the “Implicit Association Test,” or IAT.  It’s a test that attempts to answer certain questions about prejudice. The makers of this test aren’t looking to see if a person is or is not prejudiced. They assume that everyone favors one group of people over another, and that is what they are measuring. Taking the IAT and receiving my results was very interesting – not at all what I expected.

According to Clayton McCleskey’s article in The Wall Street Journal, our biases can be based solely on a person’s accent.

“Most of us like to assume that we’re enlightened, tolerant, and unprejudiced people. Unfortunately, a new study reveals many of us have a hidden bias against anyone with a foreign accent. … ‘The further from native-sounding an accent is, the harder we have to work, and the less trustworthy we perceive the information to be.’ It gets worse: ‘Researchers found that the heavier the accent, the more skeptical participants became.’ In other words, if it sounds like you’re not from around here, my suspicion radar is on high alert. My bias about you isn’t based on your character; it’s based on the fact that you talk ‘different.’

“The researchers want to reassure us that we’re not really racist or prejudiced (thank goodness). Apparently, we’re just lazy. Well, again they don’t want to pass judgment: we’re not actually lazy; our brains are lazy. In the researcher’s words, ‘Our brains prefer the path of least resistance.’

“That seems like a nice way to say that, despite our best intentions, we all have pockets of prejudice and bias. In biblical terms, we show favoritism toward people who resemble us. Perhaps this study shows why we need Jesus’ help to uproot our partiality and love people who don’t resemble us, especially people from different racial, ethnic or national groups.”1

So, to what extent are our prejudices shaping our ministry? Think about it – I can’t think of anyone who wouldn’t support a mission trip to some third world country, but what about ministering to inmates in our county jails or state and federal prisons. What about sharing Jesus with the folks who live in homeless shelters, or the ones who aren’t lucky enough to live in a shelter. How many of us have considered ministering to the intellectually and/or physically challenged?
Paul reminds us that every human is the same in Jesus’ eyes.

“God desires that we should have tender, sanctified regard one for another, and as dear children in his family, we need to have the pure love of Christ. O, shall not the seed that produces roots of bitterness and unseemly fruit be banished from our hearts, that we may cherish the heavenly plant of love? As mature Christians we shall love more and more, not less and less. We need the warmth and glow of Christ in our cold, stony hearts. We want our hearts broken by the love of Christ, and then we shall defend the characters of those who are giving their lives to the service of him who has died for them. We shall not then act the part of accusers, and treat our brethren and their labors as worthless. Let us daily pray that we may be led to a higher plane of thought and living, that we may love in sincerity and Christlike deeds.” (E.G. White, Review and Herald, October 24, 1893)

It’s important to remember that we aren’t the ones who decide who needs/deserves forgiveness. Technically, no one deserves mercy or forgiveness, but we all need it! And no matter who we are, or what we’ve done, Jesus died to make sure it’s there if we want it.

“But now the righteousness of God apart from the law is revealed, being witnessed by the Law and the Prophets, even the righteousness of God, through faith in Jesus Christ, to all and on all who believe. For there is no difference; for all have sinned and fall short of the glory of God, being justified freely by His grace through the redemption that is in Christ Jesus, whom God set forth as a propitiation by His blood, through faith, to demonstrate His righteousness, because in His forbearance God had passed over the sins that were previously committed, to demonstrate at the present time His righteousness, that He might be just and the justifier of the one who has faith in Jesus.” Romans 3:21-26

Even at the end of the book of Jonah, Jonah is still bitter about having to share God’s mercy with the people of Nineveh. He reminds me of the Prodigal Son’s big brother.

“Now his older son was in the field. And as he came and drew near to the house, he heard music and dancing. So he called one of the servants and asked what these things meant. And he said to him, ‘Your brother has come, and because he has received him safe and sound, your father has killed the fatted calf.’

“But he was angry and would not go in. Therefore his father came out and pleaded with him. So he answered and said to his father, ‘Lo, these many years I have been serving you; I never transgressed your commandment at any time; and yet you never gave me a young goat, that I might make merry with my friends. But as soon as this son of yours came, who has devoured your livelihood with harlots, you killed the fatted calf for him.’

“And he said to him, ‘Son, you are always with me, and all that I have is yours. It was right that we should make merry and be glad, for your brother was dead and is alive again, and was lost and is found.’” Luke 15:25-31

Let’s not be like either Jonah or that older brother. Jesus died so that we could all spend eternity with Him. Let’s not miss it!