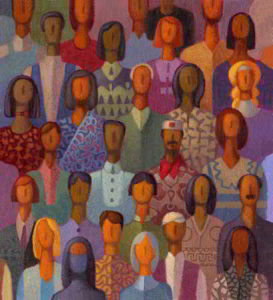 “Then Peter began to speak: “I now realize how true it is that God does not show favoritism but accepts from every nation the one who fears him and does what is right.” Acts 10:34-35, NIV

As human beings, we can come to understand our relationship to God in terms of familiar bonds. We can see that we are God’s children by virtue of the biblical account of the Creation Story.1 Although God did not bear us in the womb and give birth to us in the usual manner, the Bible still sees this as a form of familial descent.2 We are all grandchildren of the same grandparent, albeit many generations removed.

I am often amazed at the diversity within the family of God. But when I understand the familial relationship is through the Holy Spirit, I can also understand that color, gender, ethnicity, and culture are all irrelevant to that relationship. Interestingly, this very diversity that exists within the Christian faith is strong evidence that genetics, which definitely provide adaptability for survival, have little to do with God’s genealogy. Else, we would see favoritism of genotype demonstrated by a prevalence of that type within the faith community. While this may be the case within local fellowships, once we expand our view to a global one, we cannot escape the abundant diversity among the children of God.

This confronts us with an obvious question. Please pardon the pun, but since we are all, in a sense, relatives of God, whether reconciled to Him or not, just how relativistic is God in his relationship to us? Does God demand uniformity of belief and practice from His children? Is He capable of expressing Himself differently to different people and still remain God of all? And what model does this provide for us?

Perhaps our biggest barrier to understanding the answer to these questions is our own perception of God, both culturally and ethnically. According to one ongoing, online poll,4 sixty percent of those polled see Jesus as Middle Eastern. However, twenty percent see Him as White, Asian, Hispanic or African. If we are only able to see Jesus through the prism of our own culture, could this possibly affect our perception of God and how He relates to us and others? For instance, if we see God/Jesus as African, will we tend to see only African values as legitimate expressions of a genuine relationship with Him? Is God simply an expression of our culture, or does He exist outside of it?

Most know the effect this type of thinking had on the converts that resulted from the missionary proselytization during the European colonial period. Since the missionaries were from Western cultures, they imposed many of those cultural norms on their non-Western converts. To this day, many males around the world who aspire to the gospel ministry affect the wearing of white shirts and ties as a sign of their Christianity, even when these items are not native to their cultures. One cannot help but wonder if the gospel message had been brought to the United States by Africans, would Americans be wearing African dress as outward evidence of Christian commitment?

When we bring these cultural perspectives to the book of Jonah, perhaps we can then understand Jonah’s reluctance to take a message of repentance to the city of Nineveh. For Jonah, God dwelt in Jerusalem,5 and He was a Jewish God. Nineveh, however, was not Jewish but Assyrian. Although they recognized many deities, the name of the city means “Seat of Ishtar,” so it seems that they were primarily worshippers of that goddess.6 So why would a Jewish prophet find an audience in such a city? When we also consider that this mission assigned to Jonah was during the height of the Neo-Assyrian Empire7 when the Assyrian kings were greatly expanding the city and also their influence throughout the Middle East at the expense of Israel, Judah and other surrounding kingdoms, the mission seems all the more strange. Maybe these factors, among others, were what sent Jonah running in the opposite direction.

When we also see that this is the general region that God had originally called Abraham to leave behind and follow Him,8 we come to understand something else about God. He does not appear to burn any bridges behind Him. He continues to care about and reach out to those who may not care about Him. Worship Ishtar and be at enmity with God’s chosen? God will still try to reach out to you.9 This appears to be something Jonah had difficulty understanding.

We also have difficulties seeing the character of God in this respect, today. Sadly, we find it easier to understand a mother’s unconditional love for her son or daughter who has been convicted of a felony and is sentenced to prison than to understand God’s love for the lost. When a mother defends such a child, we say “Of course, she is his mother.” But God is our advocate as well. His love does not fail when we do.

When we fail to identify with that love and love the unlovely, we can begin to see the walls of the church as a barrier against those “others.” The very gospel intended to reach them with a message of hope and salvation becomes a wall of exclusion. Like Jonah, we want nothing to do with their contaminating influence. Perhaps we reason that they won’t listen anyway.

Fortunately, for many of us who have been those “others,” God does not see things that way. He knows that there are still those whose hearts would turn toward Him if they only knew of His love. Ergo, we, as God’s children, are tasked with taking that message of love to those citadels where they worship gods who are not gods and in ignorance, tear down and destroy the image of God in themselves. God was willing to die, Himself, rather than see mankind destroy itself.10 We find it difficult to comprehend that kind of love, but it draws us. It pulls on our heart strings, even if we turn from it. Jesus expressed that love is such a way that, even today, we can feel the tears in His voice.11

While God’s love is so intense and everlasting, we, like Jonah, tend not to understand its nature. Although we may ask, “Why does God allow so much evil in the world?” we fail to understand that His chosen agency for remedying that evil is us. We are to carry His message of love, hope, and reconciliation into that evil mess and proclaim it from one end of the city to the other.12 Today, as in Jesus’ day, this is a great commission and many are eager to hear that message. The problem is not whether or not hearts are willing to repent but whether or not there are those who are willing to enter Nineveh and call them.13

When Jonah became willing to carry the message of salvation to a people who seemed as far as they could possibly get from being willing to listen to that message, he found his own salvation as well. Perhaps, this is the essential message of the parable of the sheep and the goats in Matthew, chapter twenty-five.14 Perhaps salvation can only be found in our willingness to take that same salvation to others, even at great personal cost to our own well-being. After all, this is what Christ did for us.

Is any human degradation so offensive to us that we cannot minister to it? How degrading was it for Christ to leave the purity of heaven and wallow in the filth and poverty of Nazareth in order to proclaim God’s undying love for us? Are we in fear for our lives and so fail to step outside our homes to share God’s love with the world? In spite of the knowledge of His own coming death, Jesus willingly came anyway.

Some might say that Jesus was God and could resurrect Himself. Do we then doubt our own resurrection as God has promised?15 If like Jonah, we find more security in the belly of a fish than in the cities of this world, we are missing a blessing. However, the God that loves us so much that He wants to proclaim that love even in the midst of wickedness beyond imagining also proclaims that love to us, as well, even in the belly of that “fish” where we have hidden away from His call.
________________________