Does anybody remember the call-in radio show with Dr. Laura? For a while, Laura Schlessinger had a very popular radio advice program where she told people exactly what she thought about their behavior and how they should fix themselves. She often didn’t let the caller get to the actual question before she started telling them how to fix it.

I will never forget the day I heard her tell a caller that she didn’t have to forgive the person who had wronged her – that some things were just unforgivable. I guess I had never really thought about how I felt about forgiveness, but as soon as Dr. Laura told me what she believed, I knew that my belief was different.

I had a similar experience when I was teaching fourth graders. I was talking to the parents of one of my students and one of the parents said, “I’ve told Tommy that if anybody hits him, he’s to hit them back harder.” I don’t believe I had ever heard a parent make such a comment, and I’m not sure I was able to completely hide the shock I felt.

I realize I have led a sheltered life and it was good that my closed little mind was forced to expand to take in these other ways of looking and dealing with the world.

Given the opportunity to review my belief system alongside these other  philosophies, I still can’t fit either statement into the way I believe followers of Jesus Christ are supposed to live their lives.

“He has shown you, O man, what is good; and what does the Lord require of you but to do justly, to love mercy, and to walk humbly with your God?” Micah 6:8

You’re right, Micah doesn’t say the word “forgiveness” in that verse at all. But try to picture for a minute what a person who is godly, humble, merciful, and just would look and sound like. See if you can pick him out in this parable:

“Therefore the kingdom of heaven is like a certain king who wanted to settle accounts with his servants. And when he had begun to settle accounts, one was brought to him who owed him ten thousand talents. But as he was not able to pay, his master commanded that he be sold, with his wife and children and all that he had, and that payment be made. The servant therefore fell down before him, saying, ‘Master, have patience with me, and I will pay you all.’ Then the master of that servant was moved with compassion, released him, and forgave him the debt. 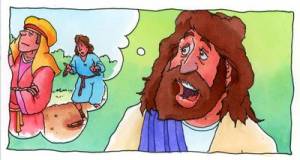 “But that servant went out and found one of his fellow servants who owed him a hundred denarii; and he laid hands on him and took him by the throat, saying, ‘Pay me what you owe!’ So his fellow servant fell down at his feet and begged him, saying, ‘Have patience with me, and I will pay you all.’ And he would not, but went and threw him into prison till he should pay the debt.” Matthew 18:23-30

Ellen White commented on this parable in the January 1, 1892 edition of Home Missionary.

“While we must depend so entirely upon the mercy of a sin-pardoning Saviour, shall our hearts remain hard and unsympathizing? Can any provocation authorize unkind feelings, or should it cause us to harbor resentment or seek revenge? Can we cast the first stone in condemnation of a brother, when God is extending his mercy to us, and forgiving our trespasses against him? Should God enter into judgment with us, our debt would be found to be immense, yet our heavenly Father forgives the debt. Men will be dealt with by God, not according to their opinion of themselves, not according to their self-confidence, but according to the spirit they reveal toward their erring brethren. We are not forgiven because we forgive, but as we forgive.” (Home Missionary January 1, 1892)

Is there anything that another human can do to us that we can, with good conscience, refuse to forgive?

Now that doesn’t mean I always feel like forgiving. I’m not at the place where letting go of hurt is easy. Knowing what is right and being willing to do right every time are two very different things.

A friend once defined forgiveness as “giving up the right to continue to punish someone for the wrong they have done us.” Using that definition, if someone has wronged us and we say that we have forgiven them, can we still go from person to person recounting the terrible thing they did to us? Can we still glare at them from across the room? Forgiving them says that we have decided not to punish them for what they’ve done.

Again, our example has to be Jesus. He has every right to punish each and every one of us, and yet he forgives us instead. He even goes a step farther and refuses to remember that we ever did anything wrong.

“He will again have compassion on us, and will subdue our iniquities. You will cast all our sins into the depths of the sea.” Micah 7:19

I read a great story this week that illustrates this text.

“One old father was reading Micah 7:19 about God’s putting away of our sins by throwing them into the depths of the ocean. He rejoiced over it and shouted, ‘Glory to God!’ His unbelieving son did not like it, so he brought a scientific encyclopedia for his father to read instead of the Bible. After some time, his son again heard his father shouting, ‘Glory to God!’ The son came and asked his father, ‘What do you read here that you are so excited about?’ The father replied, ‘I read that scientists, even with the best modern equipment, are sometimes unable to go deep enough to explore all the depths of the ocean. It means that our sins are buried there, and no one can dig them up!’1

Jesus forgives us for the unforgivable every single day – He gives up the right to ever punish us for those actions. In light of that kind of mercy, how can we do any less than forgive anyone who has wronged us?

“How did the birth of Jesus change the world? Historian Rodney Stark argues that there was one huge factor that helped capture the attention of the ancient world—Christianity’s revolutionary emphasis on mercy. Stark writes:
In the midst of the squalor, misery, illness, and anonymity of ancient cities, Christianity provided an island of mercy and security ….. It started with Jesus ….

“In contrast, in the pagan world, and especially among the philosophers, mercy was regarded as a character defect and pity as a pathological emotion: because mercy involves providing unearned help or relief, it is contrary to justice …. [Thus] humans must learn ‘to curb the impulse [to show mercy]’; ‘the cry of the undeserving for mercy’ must go ‘unanswered.’ ‘[Showing mercy] was a defect of character unworthy of the wise and excusable only in those who have not yet grown up.’

“This was the moral climate in which Christianity taught that … a merciful God requires humans to be merciful.”2

Micah summed it up well when he wrote, “He has shown you, O man, what is good; and what does the Lord require of you but to do justly, to love mercy, and to walk humbly with your God?” Micah 6:8