In Christ’s day in Palestine, you could start a heated debate in the church by just saying the word “resurrection.” Today you can accomplish the same thing during fellowship lunch by just casually using the word “perfect.” 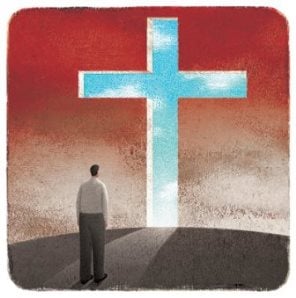 In my 47 years of being an Adventist I have observed something ironic. I have met people who have told me, that if I don’t believe that we can live without sinning, that I am not a real Adventist. Others tell me that if I do believe we can live without sinning then I am a heretic! So, I have two opposing groups telling me their version is what Adventism is all about. I have heard people argue till they are blue in the face, telling me their opinion is gospel truth and if I don’t agree with them, then I must not be a real Adventist. I have listened to other people tell me, we can be almost perfect, but not totally perfect because …..well … well…..we just can’t!

I have an idea. Let’s just fall totally in love with Jesus and not worry about it! I mean, whether we can be almost perfect, or totally perfect, let’s just let Jesus work it out. We agree God can “accomplish infinitely more than we might ask or think.” Ephesians 3:30 NLT, so arguing just how perfect we can be won’t get us anywhere, because once we decide just how perfect we can be, Paul comes along and tells us the possibilities are infinitely more than we think.

Now, as you’re reading this, I know you have an opinion, and you just can’t wait to get to the part where I say exactly what you want me to say, so you can send this link to your friends who don’t have their theology all together like you do. Maybe if I don’t say what you want me to say, you will label me a heretic and not read my posts any more. Chances are you either want to hear me say, “We can live without sinning” or, if you are on the other extreme, you want to hear me say, “Jesus will forgive you no matter how many times you fall.”

Well guess what? Everybody is right and everybody is wrong! Each extreme has partial truth, which means they are also partially wrong. So what is the truth? Put both partial truths together and you have a whole truth. We can live without sinning, but Jesus will forgive us no matter how many times we fall.

Now before you go straight to the comment section so you can warn me that probation will close and there is a limit to God’s forbearance, which I well know, and don’t disagree with, take a deep breath and take a look with me at the big picture and what I’m saying. I have heard people say that the great controversy is over whether or not God’s law can be perfectly obeyed or not. While I agree that with God’s sustaining and practical grace, we can perfectly obey God’s law, I still have never read anything in the Bible or even the writings of our pioneers telling me that perfection is what the great controversy is all about. (Please just stay with me for a moment, before you hop on your Ellen White program so you can find all those quotes you need to send me to prove that you are right and I am wrong.)

Fact: In the five-volume set of the Conflict of the Ages series, the very first line in the very first volume is “God is love.” And the very last sentence in the very last volume reads, “God is love.” That, my friend, is what the conflict of the ages or great controversy is all about! It is about the character of God – whether or not God is love! So the great controversy is not really about if I can go a whole week without eating cheese, or better yet, a whole week without taking a second glance at the perfectly proportioned lady I see at the bus stop every day. If I just fall in love with Jesus, all those things will just work themselves out perfectly, but they are still not the goal. The goal is to love Jesus and let Him love others through us!

Fact: Heaven will be filled with people who believed just about everything while they were on earth. Heaven won’t include any who argued their case till they were blue in the face and to the point of bullying others out of the church or social circles for not thinking the same way they did.

Fact: While some debate whether or not we can be “perfect,” they often have a different definition of the word “perfect” (no pun intended for all you computer geeks) than the person they are debating, which makes for a pointless debate. Regardless as to how perfect we think we can become, I think we all agree the Holy Spirit is capable of overcoming our addictions and helping us love our enemies.

With 1 John 3:4 as the primary definition we have God kicking Adam and Eve out of the garden and punishing them with death because they ate one piece of fruit they were told not to. That is not unbiblical but it is only half of the story and, more importantly, half the picture of God’s character. With John 16:9 as our primary definition of sin we have Adam and Eve placing their trust in Satan’s lies and not believing in God’s word. Thus they themselves turn their backs on God and forfeit their home through unbelief, thus breaking their relationship with God in favor of the really cool serpent and fancy lies.

With 1 John 3:4 as the primary definition of sin we struggle with John 3:16 and wonder where works come in. With John 16:9 as our primary definition we see that God gave His son to die for us and show us the truth about God’s love. Thus as we believe in Him, we now turn our backs on Satan’s lies, our relationship is restored and we have the eternal life that was originally granted in the Garden of Eden. We are now free to obey God, and the secondary definition of sin in 1 John 3:4 is fulfilled because we now trust God and therefore we trust that His commandments are always good and only good. This removes the incentive for disobedience.

Paul’s epistle to the Hebrews is about the sanctuary and even the cleansing of the sanctuary.  In Hebrews 10:26 Paul writes, “For if we sin wilfully after that we have received the knowledge of the truth, there remaineth no more sacrifice for sins.” Now if we use 1 John 3:4 as the primary definition of sin we have people going to hell because they made one mistake after knowing the truth.

It is important to note that the entire book of Hebrews is explaining why Jesus has not returned yet and what He is doing in the sanctuary before His return. Paul admonishes the early believers not to give up their faith and stop assembling together – Christ will return. So it seems to me that the primary definition of sin in Hebrews 10:26 is the sin of unbelief. Paul is not saying that if you break the law after knowing the truth there is no more forgiveness. He is saying that if we sin in not believing in Jesus as the Son of God there will be no other sacrifice or Savior.

Now as we look at the cleansing of the sanctuary in Daniel 8:14, we see that while God can and does give complete victory over the sin defined in 1 John 3:4, that still is not the main focus or goal of the cleansing of the sanctuary. “Our characters are not to be weighed by smooth words and fair speeches manufactured for set times and occasions; but by the spirit and trend of the whole life.” (Review and Herald, August 16, 1892.) And “the character is revealed, not by occasional good deeds and occasional misdeeds, but by the tendency of the habitual words and acts.”  (Steps to Christ, p. 57)

If we take John 16:9 as the primary definition of sin in the cleansing of the sanctuary it changes things. In the cleansing of the Sanctuary our minds and hearts are cleansed from the lies mankind started believing in the Garden of Eden. We see the true character of God revealed on the Cross, and we believe in Him. When our minds are cleansed of Satan’s lies we can make intelligent choices and choose the One who has already accepted and chosen us all along.

This changes how we look at a popular passage in the Christ’s Object Lessons,  “Christ is waiting with longing desire for the manifestation of Himself in His church. When the character of Christ shall be perfectly reproduced in His people, then He will come to claim them as His own.”  (Christ Object Lessons, p. 69)  Traditionally  we have taken this passage to mean that once we get our act together and show the world God’s Word can be perfectly be obeyed without making one single mistake, then God will come back to take us home. It is true that, by God’s grace, we can have complete victory over every single sin. However that is not what the great controversy is all about. The great question in the great controversy is whether God is love or not. When God’s church perfectly reflects the character of God’s love, then the world can make an intelligent decision as to if they will believe in God’s love and accept His salvation or not.  God does not want us to be perfect so we can go to heaven. He wants to perfect our love so that we give Him proper representation in the judgment, where His character is on trial. When the church perfectly appreciates God’s love, the chasm that we ourselves created, by believing Satan’s lies, will be healed.

I believe that if we keep 1 John 3:4 as our primary definition of sin, we will always be legalists and never be able to deal with the sin problem defined in John  16:9 or 1 John 3:4. I believe if we use John 16:9 as the primary definition of sin, we can bypass the legalism, grasp the big picture of what sin really is and what the great controversy is all about, and allow grace to do its work in healing the sin problem defined in both John 16:9 and 1 John 3:4.

I think I would like to add my own chapter to the story of “The Good Samaritan.” After the priest and the Levite passed by the poor man dying in the ditch, they met up with each other and started arguing and debating over the law and perfection. Meanwhile the Samaritan, who was totally clueless as to what they were even talking about “came along, and when he saw the man, he felt compassion for him.Going over to him, the Samaritan soothed his wounds with olive oil and wine and bandaged them. Then he put the man on his own donkey and took him to an inn, where he took care of him.” Luke 10:33-34 NLT.

We already know which one was being a neighbor, but now, you tell me, which one of the three really had their theology together?

Now, go and do thou likewise.