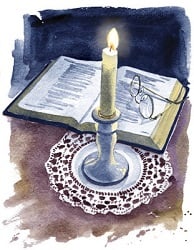 One Friday morning, I was helping in getting a friend’s house “presentable” by pulling weeds in a flower bed when I found in my hands, not a clump of ugly weeds but, instead, a beautiful begonia! I had snapped it at the root, and there was no way I could now save it. In my mind I could hear Jesus telling me,

“See why I don’t let you go pulling weeds in my church? You can’t tell a beautiful begonia from a weed. There is no way I am going to let you destroy a totally innocent member of My church, just because you think they are a heretic. I will do My own weeding thank you. I can tell a weed from a begonia. Obviously you can’t.”

I have become concerned lately how easily some in the church judge others, and use the word “apostasy” in Adventist circles during disagreements. That is a strong word! It is a bit like us doing our own weeding when that has been reserved as God’s role. Apostasy is defined as a total desertion of or departure from one’s religion, principles, party, cause.” 1 In Christian circles, it carries an even stronger connotation of not being a Christian at all. Even Jesus, who could read hearts did not accuse anyone in the Bible of being an apostate or heretic. So so why do some of His professed followers do that?

It is not apostasy to accept a doctrine widely accepted by other Christian denominations.  Remember, the Seventh-day Adventist Church grew out of many denominations. Our church’s founders agreed with a great many doctrines that were first held in other churches. Rachel Oakes, a Seventh-day Baptist introduced the Sabbath. It was adopted by the group because they found the practice to be biblical. Baptism by immersion likewise was accepted from the Baptists, but immortality of the soul was rejected. Our system of governance is largely based on the Methodist model. Doctrines were accepted or rejected on a biblical basis and not on whether they were believed by other churches or not.

Our mandate is clearly described in 1 Thessalonians 5:21

“Prove all things; hold fast that which is good.”

Good doctrine is determined by the Word of God (2 Timothy 3:16) and not by which denominations believe or don’t believe it.

Opposition to some doctrines seem to be based on the idea that our purpose is to disagree with the teachings of other churches. But the purpose of the Seventh-day Adventist Church is not to disagree with everybody else. For example, the doctrine of the trinity is held in common with most Christian denominations. Indeed it was the Catholics who first used the term trinity to describe the mystery of the Godhead as we understand it. The Seventh-day Adventist Church accepts this doctrine, not on the basis of who believes it but the fact that it is supported by strong Biblical evidence.

Good doctrine is not determined by what our pioneers taught.

Just because our pioneers believed something at one time, does not make it right. We need to remember that our pioneers came from various backgrounds and brought their beliefs with them, and it took some time for them to study the Bible together and come to a unified understanding of what the Bible really teaches. If we determine good doctrine on the basis of pioneer beliefs, we are making idols of our pioneers. And we are likely to adopt some views that our church later found to be unsupported by the Bible.

It helps to remember that “All that’s old is not gold. All that’s new is not true!”

Basing our teachings only on what our pioneers believed would be basing our teachings on traditions of the past, just as the Pharisees did. In the Sermon on the Mount, Jesus did not do away with the teachings of Moses, but He brought greater insight and light to such teachings as murder and adultery than Moses had. Jesus replaced traditions in the church with simple Scripture. While it was not Jesus’ aim to do away with the church of His day, it was His aim to get it back on track with the Word of God.

I believe that God wants His last-day remnant church to worship Him (First angel’s message) instead of the Adventist pioneers, and test truth by Scripture rather than the beliefs of our pioneers.

Paul commended the Bereans for being “more noble” than the people of Thessalonica, because they “searched the scriptures daily, whether those things were so.” (Acts 17:11)

I pray that in our discussions we will take the “more noble” approach of the Bereans and heed Paul’s counsel to the Thessalonians to “Prove all things; hold fast that which is good.” (Thess 5:21)