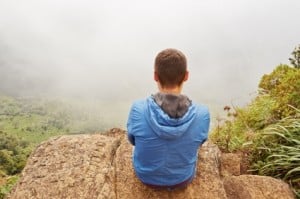 It was a simple question: “What are you doing here?” Standing in a cave after fleeing for his life, Elijah recounts the lament of his soul. His recent conquests for God appear to have taken a turn for the worse. Feeling alone and confused, this man of great experience, has all but given up and resigned himself to defeat. Elijah is in a crisis and he needs a word from the Lord.

Instructed to stand on the mount to hear from God, Elijah witnesses hurricane force winds that batter the mountain. An earthquake shakes the ground with a mighty force followed by a raging fire that seeks to consume everything in its path. “Is that you, God? Are you speaking to me?”

Following this demonstration of raw and terrifying power Elijah hears a still small voice. God is now speaking to the heart of Elijah.

“It is not always the most learned presentation of God’s truth that convicts and converts the soul. Not by eloquence or logic are men’s hearts reached, but by the sweet influences of the Holy Spirit, which operate quietly yet surely in transforming and developing character. It is the still, small voice of the Spirit of God that has power to change the heart.” Ellen White, Prophets and Kings, p. 169.

It’s in these moments of God speaking to our hearts that we realize there is nothing in us worthy of bragging about; we are totally dependent on God’s mercy and grace.

This reality expressed in prayer is best described by Jesus himself. It was a typical worship day at the temple filled with people with various agendas. The gospel writer Luke recounts the pompous prayer of a Pharisee who had come to worship but had no sense of his great need. Feigning a prayer to God, he used his prayer as a way to get attention and to extol his deluded, imaginative ideas of his superiority.

Another man attended the same worship service. All we know about him is that he was a tax collector. He may have been well experienced in the manner of prayer and may have encountered those bursting with instruction for others on how to pray. “Do it this way,” they might have said. “Speak at this volume. Use these words. Raise your hand and shout this way.”

“And the tax collector, standing afar off, would not so much as raise his eyes to heaven, but beat his breast, saying, ‘God, be merciful to me a sinner!’” Luke 18:13 NKJV

Do you hear the anguish of a man who knows his only hope is through the mercy of God? Do you hear a man praying from his heart? Jesus did, and said to his disciples, “I tell you, this man went down to his house justified rather than the other; for everyone who exalts himself will be humbled, and he who humbles himself will be exalted.” Luke 18:14

At one time or another you have probably had the “What are you doing here?” moment. You’ve tried going through the motions of religion on your own and found yourself still empty inside. You made resolution upon resolution including renewing a prayer life, but had very little to show for it. Maybe it’s time to listen for the still small voice of God.