↓
Home→Feature→The Bible Truth About the Rapture

Let’s take a look at the entire context of the passage in Matthew 24.

“When the Son of Man returns, it will be like it was in Noah’s day. In those 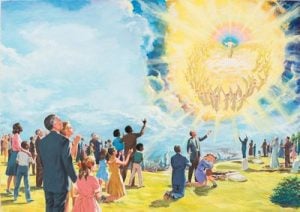 days before the flood, the people were enjoying banquets and parties and weddings right up to the time Noah entered his boat. People didn’t realize what was going to happen until the flood came and swept them all away. That is the way it will be when the Son of Man comes. “Two men will be working together in the field; one will be taken, the other left. Two women will be grinding flour at the mill; one will be taken, the other left. Matthew 24:37-41 NLT

In the days of Noah the people who were swept away or “taken away” as other versions describe, were the wicked people, not the righteous. Jesus tells us it will be the same when He comes. So the ones taken in the field and at the mill are not the righteous, they are the wicked! They are taken away from the presence of the righteous and destroyed, just like in the days of Noah. So, Jesus is telling us that two men will be in the field; one will be taken and destroyed, just like the tares that are bundled up and destroyed in Matthew 13:30 while the wheat remains in the barn. By saying the other man is left, Jesus means that man is left alive and not destroyed. In Matthew 13:38 Jesus says the field is the world. That tells us that the one who is taken is destroyed while the one who is left inherits the new earth. (See Matthew 5:5 and Revelation 21:1-5.)

When you read Matthew 24:37-41 as it reads, there is no hint of a secret rapture. After all, when the wicked were swept away in the flood that was no secret. The whole world at that time saw what was happening. The eight who remained and took over the earth knew what was going on the whole time also. There were no secrets either way.

Far from being a secret the entire world will know.

Behold, He is coming with clouds, and every eye will see Him, even they who pierced Him. Revelation 1:7 NKJV

For the Lord Himself will descend from heaven with a shout, with the voice of an archangel, and with the trumpet of God. And the dead in Christ will rise first. Then we who are alive and remain shall be caught up together with them in the clouds to meet the Lord in the air. And thus we shall always be with the Lord. 1 Thessalonians 4:16-17 NKJV

Yes there will be a rapture when we are taken up, but it will be no secret. Why is it so important that everyone sees Jesus coming instead of the righteous just secretly disappearing? There are many reasons, but I am sure that Satan does not want to have to face the music. He would rather avoid that confrontation when Jesus comes as King of kings and Lord of lords. But there is no avoiding it. One day,

As I live says the Lord, Every knee shall bow to Me, And every tongue shall confess to God. Romans 14:11 NKJV

When the great controversy is finished, the entire universe will declare that God is love. And that is a truth that Satan would rather cover up and keep secret, but he won’t be able. The whole world will see Jesus coming, and He will take home with Him all those who have accepted His love into their lives. Let’s accept Him into our hearts now so that we will greet His coming with joy.