↓
Home→Feature→Can’t We All Just Get Along?

In the interest of full disclosure, I hate conflict. I will go to great lengths and do almost anything to avoid it. But I know folks who appear to thrive on conflict. They are not afraid to say exactly what they mean, even if they’re pretty sure it’s going to upset someone. 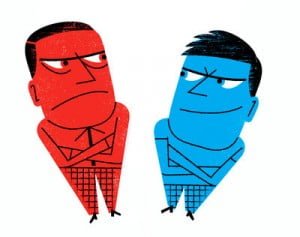 When we talk about the early Christians we like to concentrate on the “all in one accord” parts of the story – they were so unified. Everybody got along and there was no conflict in the early church. But that’s not the way it was! We forget that as the disciples were setting things up, they ran in to some rough spots – some things on which they didn’t agree. We can even read in Paul’s letters in which he reminded them to not let their disagreements over who their preacher was get in the way of their belief in Jesus.

When I think of unity –“all in one accord”– I think of that famous scene in the movie, Spartacus. In case you haven’t seen it:

“Spartacus is a classic movie that retells the historical account of the great Roman slave rebellion in 71 B.C. Spartacus was a highly trained gladiator who escaped and led other slaves to freedom. As news of his rebellion grew, thousands of slaves joined his cause and followed him through victories and defeats.

“Near the end of the movie, a massive Roman army under the command of Senator Crassus (Laurance Olivier) captures the rebels. Although Crassus does not know what Spartacus (Kirk Douglas) looks like, he suspects that Spartacus is alive amongst the prisoners under guard. In full Roman uniform, Crassus gallops up to the mouth of the valley where the prisoners are being held and shouts an offer to them: they can escape death by crucifixion if they turn Spartacus over to him.

That scene really demonstrates the concept of unity, something that can so easily be lost in our day-to-day walk with Jesus. We get caught up in our differences of opinion about things that don’t really matter to our salvation, like whether the pews should be dark or light wood and whether the bathrooms are painted blue or green. Remember, the early Christians met in the catacombs – caves filled with dead people. I’m pretty sure decorating was not the first thing on their minds.

Unity is really, really important, but sometimes, our push for unity goes too far. We decide that unity is more important that truth, and that’s a real problem.
Check out this comment from a church leader about what is more important – unity or truth:

“If you must make a choice between heresy and schism, always choose heresy.”2

This quote comes from an Episcopal bishop, Peter James Lee. What I want you to notice is what this bishop is saying. He is saying that he believes that if we ever come to a place where we have to decide between allowing false teachings into our church or standing up for the truth at the risk of causing a split in the church, we should accept the false teachings. Did you get that? Unity at the cost of truth!

Maybe you’ve seen the bumper sticker/t-shirt that has the symbols that represent Islam, Pacifism, Gay Rights, Judaism, Paganism, Taoism, and Christianity arranged so that they spell out the word “coexist.”

If the question is, “Can we, as Christians, get along with all these other people?” the answer is, “100% YES!”

“Give none offence, neither to the Jews, nor to the Gentiles, nor to the church of God: Even as I please all men in all things, not seeking mine own profit, but the profit of many, that they may be saved.” I Corinthians 10:32-33

But if the question is, “Should we agree with all of those beliefs and practice them in our own congregations?” Then the answer is absolutely, “NO!” Unity doesn’t mean compromising the truth.

“The Texas Army National Guard has a group of special workers called riggers. Their job is to fold and pack the parachutes soldiers use when jumping from an airplane at 5,000 feet. These people are intensely dedicated to their task. The Rigger’s Creed states, ‘I will be sure always!’ They know jumpers need assurance that everything regarding their chutes is perfect. In the 20 minutes it takes to meticulously pack an MC1-1 military parachute, 30 folds are required. A jumper has nothing to do with the chute until they put it on before a jump. Trust in the error-free performance of the riggers is all a jumper has to rely on.
“The Rigger’s Creed further states: ‘I will never let the idea that a piece of work is ‘good enough’ make me a potential murderer through a careless mistake or oversight, for I know there can be no compromise with perfection.’ Riggers know that the parachute business is a life-or-death enterprise. Mistakes cost lives. There is no room for complacency.

“Do we approach our kingdom responsibilities with equal fervor?”3

Satan uses many ways to turn us away from God. He can use the everyday conflicts between people to drive us out of the church or he can use the infiltration of false teaching so we are lost without ever leaving the church.

We can’t let our salvation be threatened by disagreements with our brothers and sisters in Christ, but we also must guard against compromising what we know to be truth in an effort to be unified.

“Be alert and of sober mind. Your enemy the devil prowls around like a roaring lion looking for someone to devour.” 1Peter 5:8