↓
Home→Feature→Confessions of a Rich Bible Worker

“And all the believers met together in one place and shared everything they had.  They sold their property and possessions and shared the money with those in need. They worshiped together at the Temple each day, met in homes for the Lord’s Supper, and shared their meals with great joy and generosity.” Acts 2:44-46 NLT 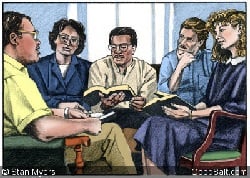 As a very rich Bible Worker I would like to speak out today on a social issue. It seems by some news articles I have been reading that some professed Christians do not believe in helping the poor. They assume all poor people are lazy, and thus do not deserve help. This is not necessarily true. They also assume all rich people are hard workers who have earned every cent they have, and this is not necessarily true either.

They forget that when the landowner in Matthew 20:7, asked the people why they had been standing around all day, it was not because they were lazy but “They replied, ‘Because no one hired us.” They also forget that in Daniel 4:27  King Nebuchadnezzar was greatly humiliated because he refused to take the prophet’s advice to “Break from your wicked past and be merciful to the poor.” They also forget Nebuchadnezzar was greatly humbled when he took credit for his riches! “‘Look at this great city of Babylon! By my own mighty power, I have built this beautiful city as my royal residence to display my majestic splendor.’ Daniel 4:30 NLT

Before I go any further, let me explain why I call myself a very rich Bible Worker. First of all, I am rich, not just because I have a car while 91% of the earth’s population has no car. It is not because I have a nice clean home while millions are homeless. According to over a billion people walking this earth, I am filthy rich because I have access to clean drinking water!

I am also a rich Bible Worker, because my church, the Tampa First Seventh-day Adventist church believes in supporting its Bible Worker with a fair salary. They also provide me with full medical benefits. I know many Bible Workers who do not make half of what I do. A few years ago I was actually offered my own church with a pastoral stipend position out West, but I turned it down because it would have been a pay cut. Why take a pay cut for a bigger headache? Many Bible Workers do not have benefits or their own place to live. Since I am well taken care of, after my tithe and local giving, I often send money to help other Bible Workers who are not being supported anywhere as well as I am. Why do I say this? Isn’t our giving supposed to be in secret? Yes it is. But while we live in a world of professed Christians thinking they have earned everything they have and that all poor people are lazy, I want to share why I give to other Bible Workers, because while many of them are doing a much better job than I am, they are not getting paid anywhere close to what I am! In order to be fair I feel I need to share some of my blessings that have been given to me. God has given me a wonderful working situation in South Florida. I have not earned it! Here are a few things we need to understand.

While God had been blessing the Tampa First Church with many baptisms and church growth over the last several years I have been here, it does not mean I am working harder or better than anyone else. I am in a fertile field. There are Bible Workers you have never heard of because they can’t afford their own website or computer to post their experiences, but they are working long hours on hard soil.

A while back after I baptized a couple of my Bible study students, an elderly lady walked up to me, and said, “We can see by these baptisms you have been working very hard.” Granted, I have. However, there are Bible Workers out there working twice as hard as I am but without any baptisms. They are working in hard places where the soil is not fertile and the financial support is weak. I would be crazy and the laughing stalk of angels, if I thought I was getting paid more because I was working harder and doing a better job! (And maybe if you think you’re getting paid more than others because you are better than they are, you are crazy too!)

Please understand I was not always a rich Bible worker. Well I guess I was because I always had clean drinking water available, but I didn’t always have a great salary. There were times I was really struggling. There were times a certain church did not have the money to pay me, but I still put in the time, and spent my own gas money and paid for my own supplies, and at the end of the month I was in debt, because the money for my pay did not come through. There was also a time I sent my car to be repaired by a brother in the church so that we could mend fences, but instead of fixing it, he destroyed it, leaving me without a car or money to get one, as he refused to give me my money back after destroying my car, by what the other mechanics said was a “gross and deliberate error.”

Still I survived and made it through, thanks to those who knew the situation, and understood I was a workman “worthy of his hire” and not just some lazy charity case. Sure, I also sought part-time and sometimes full-time secular employment to provide for my needs and even my ministry. I was not a charity case. Speaking to gospel workers, Christ Himself says, “Don’t hesitate to accept hospitality, because those who work deserve their pay.” Luke 10:7 NLT

Today, when I give my money to Bible Workers who are working hard in hard places, I do not consider it charity. I do not consider it giving my money away. They have earned it. They deserve it. It is not a gift from me. God has given the money into my hands so that I may pay them what they have worked for and earned.

Some say I should be saving that money for my own retirement instead of helping other Bible Workers. Well you know what? If I end up retiring under a bridge in the Florida Keys instead of a nice Adventist retirement village guess what? There are millions before me who have retired and lived under a bridge, who probably deserved a retirement home much more than I do! I understand the home I have now and the clean drinking water are gifts from God, which I do not deserve, and God can take those gifts away any time He wants. I haven’t earned a thing!

I’m not bragging or boasting. I am just being real and transparent. Two thousand years ago the entire church realized they had not earned anything or deserved any more than the poorest church member. That’s why,

“all the believers met together in one place and shared everything they had. They sold their property and possessions and shared the money with those in need. They worshiped together at the Temple each day, met in homes for the Lord’s Supper, and shared their meals with great joy and generosity.” Acts 2:44-46 NLT

So please fellow Christians, please stop calling all poor people lazy. There are poor people who deserve a lot more than they are getting, and a lot of rich people like me who haven’t earned all they have!

Before I go I would like to thank all those who have faithfully supported the Bible Work in all the places I have served, and for supporting Bible Workers all over the world. I will be thanking you throughout eternity!