↓
Home→Feature→Significance of One Ordinary Person

History is full of the stories of great people who have had a monumental influence on the history of their church, their country or the world. 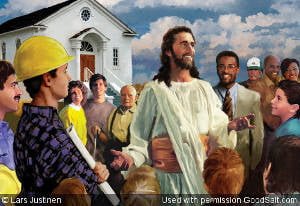 But what about ordinary people – people like you and me?

Most of us probably know at least intellectually that Christ would have died for just one sinner – a sinner like you or me.1  But have we stopped to consider what that means?

It also means that just one person can change the world, by being a channel of Christ’s power.

The Bible demonstrates that God usually works through a community of faith. But that doesn’t mean that He doesn’t use individuals to make a difference – single individuals who allow Him to use them as channels of His power so that others will follow.

Just one ordinary person – the son of a shepherd, sold into slavery, then installed as governor of Egypt – saved a whole nation from starvation. 2

Just one ordinary person – the son of slaves, left as a baby to be picked up by a daughter of the emperor – delivered a nation of slaves from Egypt. He did that after having learned the lesson that the best training Egypt could afford wasn’t what God needed in him.3

Just one ordinary woman whose name was Deborah, with the backup of another ordinary woman named Jael delivered their people from 20 years of oppression. (Judges 4:1-23)

Just one ordinary man named Gideon, delivered Israel from slavery with just 300 men, by the command of God. (Judges 6:11-15ff)

Just one ordinary woman changed the course of history by allowing the Holy Spirit to impregnate her while facing the condemnation of her village as an unmarried mother. She gave birth to a son who would be the Savior of mankind.

Just one ordinary woman obeyed the command of God to “Make known to others what I have revealed to you,” and her obedience shaped the history of the Seventh-day Adventist church. 4

When churches are revived, it is because some individual seeks earnestly for the blessing of God. He hungers and thirsts after God, and asks in faith, and receives accordingly. He goes to work in earnest, feeling his great dependence upon the Lord, and souls are aroused to seek for a like blessing, and a season of refreshing falls on the hearts of men. (Ellen White, Christian Service, p. 121)

Will you be the one individual who earnestly seeks God and makes a difference in your family, your church,  your neighborhood, your place of work?

After all, “There is no limit to the usefulness of one who, by putting self aside, makes room for the working of the Holy Spirit upon his heart, and lives a life wholly consecrated to God.”[11. Ellen White, Desire of Ages, p. 250[

Will you be the one who puts self aside to make room for the Holy Spirit’s working in your heart?

There’s literally no limit to what God can do with such a one. (That’s you!)