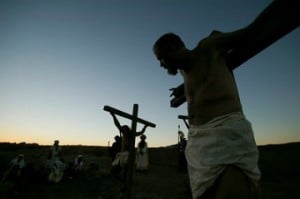 This is a part of the opening sentence of the classic novel, A Tale of Two Cities, by Charles Dickens. Written to indicate the opposing factors of the author’s subject, this line could aptly describe the tensions that existed during the period of this week’s study on Crucified and Risen.

To close out this quarter on the book of Luke we take a high-level look at important events in the days leading up to and post the crucifixion. In each instance we can clearly see the forces of evil arrayed against the Son of Man.

As our Savior prayed earnestly in the Garden, the backstory would be His disciple’s inability to enter into sympathy with Him during this difficult phase. Although they walked and talked with Him each day and listened to lesson after lesson about the Kingdom of Heaven, they could not see beyond the popular misapplication of scripture of their generation. And they slept while He prayed.

And while Jesus prayed and the disciples slept, one of their own, Judas, was in the process of betraying his Master. Evil men involved in this conspiracy of murder were surely gloating over the defection of a trusted disciple. Now they would be able to gain the upper hand over the target of their jealously and envy.

To all appearances it would seem that this would be a disastrous combination – the disciple’s spiritual denseness and Judas’ betrayal. For years Jesus made this select group of men the depositories of the richest teachings man has ever known. He had carefully guided them, both by example and precept, but it appeared to be all for naught.

Finding Him in the garden, an unruly mob bound and took Jesus away. Treating Him as a danger to society, they conducted a kangaroo court to find some cover for their dastardly act. Their persistence paid off and they were given the green light to fulfill the darkest passions of their hearts.

“And Pilate gave sentence that it should be as they required. And he released unto them him that for sedition and murder was cast into prison, whom they had desired; but he delivered Jesus to their will.” Luke 23:24-25

To those sympathetic with Jesus, this was the worst of times. Many had hoped that He was the Messiah. They had hoped that it would be He who would deliver them from their national foes. They hoped it would be Joseph’s son who would make all things right again for their nation. But now it appears they were wrong and their hope was about to be extinguished. This was a dark, dark day for many.

Hanging upon a criminal’s cross, Jesus was paying the cost for man’s sin. While it appeared that the worst day imaginable was underway, the truth was that this would prove to be the best day possible. Jesus was redeeming man.

Although the crowd misread the magnitude of the moment, there was one who was able to see clearly Who was hanging upon the cross. He had witnessed the abuse heaped upon Jesus and the remarkable manner in which He endured. No doubt the news he had heard about Jesus, His love and compassion, His concern for the least, was now validated before his eyes.

This man, only known as a “thief” was at the seemingly the worst day of his life. Hanging upon a cross himself, he had no chance to redeem his name or restart his life. The events of his life that led to that moment were unchangeable (so it seemed).

Now looking upon Jesus hanging beside him he saw the Hope of all ages. He discerned in the bloodied face a King’s countenance. He sensed, no he knew, that this was indeed the Messiah, and his soul in sincerity cried out to his only hope for redemption.

“And he said unto Jesus, Lord, remember me when thou comest into thy kingdom.” Luke 23:42

Over the roar of taunting shouts he heard an assurance that he has made peace with God. His fate was now in the hands of God and his future was sure. What started as the worst of days had now become the best of days. He had been saved.

Friend, draw comfort knowing that our God is drawing us and freely offering to change our worst days into our best days. Although clouds may often hide Him from our view, keep faith that His promises are sure and they are for you.

“Be strong and of a good courage, fear not, nor be afraid of them: for the Lord thy God, he it is that doth go with thee; he will not fail thee, nor forsake thee.” Deuteronomy 31:6

We close this quarter’s lessons on Luke with some of the final words of Jesus as recounted by Luke. They are applicable to each one of us and encourage our continued study into the sacred word:

Then He said to them, “These are the words which I spoke to you while I was still with you, that all things must be fulfilled which were written in the Law of Moses and the Prophets and the Psalms concerning Me.” And He opened their understanding, that they might comprehend the Scriptures. Luke 24:44-45