↓
Home→Daily→Tuesday: Daniel 2 and the Providence of God in History 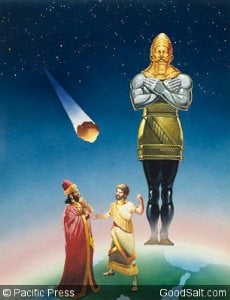 In the 1700s, a Frenchman, an atheist, speculated that because all of the universe, including human actions, were predetermined by natural laws—then, ideally, if someone could know all of those laws and all the positions of all the particles in the universe at a given time, then that person could know everything that would happen.1

Of course, humans do have free will, free choice. God made us that way. As beings who can love, we had to be given free choice, because love that is forced cannot be love. To make us capable of love, God had to make us free. And yet, God’s power is so great that, even with human free will, He knows the future perfectly, regardless of the free choices that we make.

Review the prophecy of Daniel 2. In what ways is this one chapter powerful evidence, “proof” even, that God knows the future, and far in advance too?

This chapter was written more than twenty-six hundred years ago. Look at how history has unfolded exactly as God predicted. In one sense, this prophecy should be more meaningful for us today than for those who lived millennia ago. And that’s because we, today, looking back at history, can see exactly how these empires came and went, just as predicted. If you had read this prophecy during the time of Media-Persia, you wouldn’t have seen the rise and fall of the empires that came after. Today, looking back, we can see much more than someone from long ago could see. Thus, the prophecy holds a power for us that those in the past couldn’t appreciate.

And the amazing thing is that despite these millions of people, all with free will, who lived during the long epochs depicted in Daniel 2, the Lord knew exactly what was going to happen, what kingdoms would rise and fall. And He knew it way in advance too.

The prophet Daniel was right about the rise and fall of all those kingdoms: Babylon, Media-Persia, Greece, and Rome, including the breakup of Rome into smaller powers that still exist today. From where we stand in history, the only kingdom left is the last one, God’s eternal kingdom (Dan. 2:44). If he was right on all the ones so far, how foolish would it be to not trust him on the last one?