↓
Home » Death and the Resurrection in Light of the Cross 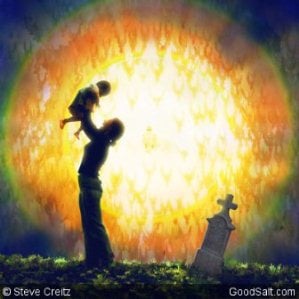 It’s that time of year when the leaves spring back onto barren trees and flowers bloom back to life. Every spring reminds me of the second coming and resurrection. I believe God lets everything die in the winter and come back in the spring to demonstrate for us His re-creation and resurrection power. Just as sure as the trees that seem to die in the fall have new life in the spring, we can be sure our sleeping loved ones in Christ will be brought back at the second coming. Sometimes we take it for granted that we all know what happens when you die, but recently I have met people even in the church who have some questions. It is okay to have questions.

We should never assume someone knows it all just because they are in church. This may sound funny, but while growing up a Seventh-day Adventist, attending our schools, there was a lot that I was told I knew even though I was never taught it. For example, I was told by one of my teachers, that I was fortunate to go to a school where I was taught and understood the cleansing of the sanctuary. Reality check: While I grew up in a school where I was told I was taught and understood the the cleansing of the sanctuary I was never actually taught it! I was just told that I was taught it. So of course I was too embarrassed to ask questions, since I was already supposed to know. Finally in my mid-twenties, I realized I was not going to learn any younger, and I started asking questions. So I understand when people in the church have questions. Since I have met some people lately who tell me they are not sure what happens when you die, I thought this might be a good time to share the study “Death in Light of the Cross” from the “In Light of the Cross Bible Study Guides.” By the way, there is also a Spanish version available.

Why is it important to know the truth about death:

The teaching that you don’t really die is a lie Satan started in the Garden of Eden when he told Eve, “Ye shall not surely die.” By telling this lie Satan hoped to get Eve and all mankind to believe that there is really no consequence for disobeying God. He also wants us to believe that we are all immortal even if we have no relationship with God. This opens the door for spiritualism in which people may actually communicate with the devil and his angels, thinking they are speaking with their loved ones.

Our salvation does not come from knowing what happens when we die. Our salvation is found alone in God’s love. However, no lie is ever harmless, and when Satan told the lie, “Ye shall not surely die,” not only was he lying, but he was also calling God a liar.

Why understanding death in the light of the cross is important:

If you don’t really die, then Jesus did not really die for us, and we still need a Savior. The lie that we don’t really die destroys the cross and everything Jesus endured and accomplished on it. If Jesus was not really tasting death like Hebrews 2:9 says He did, then we have just minimized the cross to a six-hour pain endurance marathon.

I remember sitting in a funeral for a little girl who was hit and killed by a car. Her mother sat on the front pew, sobbing uncontrollably. Meanwhile the pastor talked about how happy the little girl and Jesus were right now up in heaven. Do you know how cruel that made Jesus look to the poor mother? Would Jesus tear a mother’s heart apart just to go have fun with her daughter? I think not! The little girl is resting in her grave and will be united with Jesus in heaven when the mother is reunited with her at the second coming.

For Further study on Death:

What did Adam become?

And the LORD God formed man [of] the dust of the ground, and breathed into his nostrils the breath of life; and man became a living soul. Genesis 2:7

What returns to God?

Then shall the dust return to the earth as it was: and the spirit shall return unto God who gave it. Ecclesiastes 12:7

What is the spirit?

All the while my breath is in me, and the spirit of God is in my nostrils; Job 27:3

What does God take that turns the body to dust?

Thou hidest thy face, they are troubled: thou takest away their breath, they die, and return to their dust. Psalm 104:29

What age-old question did Job ask?

What is the Bible answer?

So man lieth down, and riseth not: till the heavens [be] no more, they shall not awake, nor be raised out of their sleep. Job 14:12

Do the dead know what happens to the living?

His sons come to honour, and he knoweth [it] not; and they are brought low, but he perceiveth [it] not of them. Job 14:21

How much do the dead know?

What did Jesus call death?

These things said he: and after that he saith unto them, Our friend Lazarus sleepeth; but I go, that I may awake him out of sleep. Then said his disciples, Lord, if he sleep, he shall do well. Howbeit Jesus spake of his death: but they thought that he had spoken of taking of rest in sleep. Then said Jesus unto them plainly, Lazarus is dead. John 11:11-14

How long had Lazarus been dead?

Then when Jesus came, he found that he had [lain] in the grave four days already. John 11:17

Did Martha believe Lazarus was in heaven?

Martha saith unto him, I know that he shall rise again in the resurrection at the last day. John 11:24

What did Mary say?

Then when Mary was come where Jesus was, and saw him, she fell down at his feet, saying unto him, Lord, if thou hadst been here, my brother had not died. John 11:32

Was Lazarus called from heaven, hell or the grave?

And when he thus had spoken, he cried with a loud voice, Lazarus, come forth. And he that was dead came forth, bound hand and foot with grave clothes: and his face was bound about with a napkin. Jesus saith unto them, Loose him, and let him go. John 11: 43-44

When are the dead raised?

For if the dead rise not, then is not Christ raised: And if Christ be not raised, your faith is vain; ye are yet in your sins.Then they also which are fallen asleep in Christ are perished. If in this life only we have hope in Christ, we are of all men most miserable. But now is Christ risen from the dead, and become the firstfruits of them that slept. For since by man came death, by man came also the resurrection of the dead. For as in Adam all die, even so in Christ shall all be made alive. But every man in his own order: Christ the firstfruits; afterward they that are Christ’s at his coming. 1 Corinthians 15:16-23

When do we receive immortality?

Behold, I show you a mystery; We shall not all sleep, but we shall all be changed,In a moment, in the twinkling of an eye, at the last trump: for the trumpet shall sound, and the dead shall be raised incorruptible, and we shall be changed. For this corruptible must put on incorruption, and this mortal [must] put on immortality. So when this corruptible shall have put on incorruption, and this mortal shall have put on immortality, then shall be brought to pass the saying that is written, Death is swallowed up in victory. 1 Corinthians 15:51-54

Our hope and comfort:

But I would not have you to be ignorant, brethren, concerning them which are asleep, that ye sorrow not, even as others which have no hope. For if we believe that Jesus died and rose again, even so them also which sleep in Jesus will God bring with him. for this we say unto you by the word of the Lord, that we which are alive [and] remain unto the coming of the Lord shall not prevent them which are asleep. For the Lord himself shall descend from heaven with a shout, with the voice of the archangel, and with the trump of God: and the dead in Christ shall rise first: Then we which are alive [and] remain shall be caught up together with them in the clouds, to meet the Lord in the air: and so shall we ever be with the Lord. Wherefore comfort one another with these words. 1 Thessalonians 4:13-18

Here is some help with texts that are difficult to understand about death and other topics.