↓
Home→Feature→Do I Really Need to Know God’s Plan for my Life? 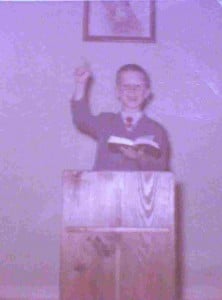 This is me preaching when I was about 5 years old, from a pulpit my father built me, when I told him I was going to be a preacher.

While many people ask why God does not show them His will for their lives I have come to a simple conclusion. He does not need to.

He hath showed thee, O man, what is good; and what doth the LORD require of thee, but to do justly, and to love mercy, and to walk humbly with thy God?  Micah 6:8

When I was four years old, I remember sitting in church, knowing – not wishing or hoping – knowing I would be preaching the gospel one day. However, as I became older, it was unclear to me if my preaching would be as a paid pastor or as a lay pastor.

Each spring, as high school graduates contemplate their future, I hear the question, “What does God want me to do with my life?”  Regardless if they are planning on college or going straight into the work force I sometimes hear them say, “I wish God would tell me what He wants me to do.”

After one year of college I was not sure if I was really “supposed” to be a full-time preacher or gospel worker. I mean I knew I loved Jesus and wanted to share his love with others, but doesn’t every Christian do that? How do I know if I had been called? My life was in a fog.

I started working for a business forms company, and I started dating a young lady who attended a small Adventist church outside of Tulsa where I lived. I left the larger church in Tulsa to be with her. Things did not work out between us like I dreamed, and she moved away. Something told me to stay at the small church instead of going back to the larger church. I have to admit I did not know why I was doing what I was doing. It may have been that I did not want to admit she was the only reason I came there to begin with. Not long after that, two literature evangelists joined that small church, and invited me to join them. I left the business forms company and became a literature evangelist. Soon afterwards, a new pastor came to our church and asked me to be his Bible Worker. Soon after, he moved to Texas and hired me down there. Several times I thought about finishing college but the time just never seemed right.

After I had been a Bible Worker for a few years in Texas, a friend got me hired on part time at UPS for some extra income, and so that I would have health benefits for my fiancé. Well, once again things did not work out between me and my love, and she politely broke up with me. The next morning when my 2 AM alarm went off to go to UPS, my first thought was, why go in? The person I got the job for has left me. For some reason, as much I hated getting up that early, I did it anyway. (Never mind the fact that I also had a broken heart that morning and severe depression.) I was in a fog and had no idea why I was still working at UPS. I had no idea, but God did. A few weeks later, the church in which I was a Bible Worker  had to let me go due to lack of  funds and other financial obligations. UPS became my only job!

After working my way to supervisor at UPS, my sister sent me a notice of a church in Tampa Florida needing a Bible Worker. I had no interest in moving to Florida. I had sunk my roots in Texas. However, one night I emailed my resume to Tampa, just to hush my family who kept asking me about it. I figured by now they had already filled the position. But I got a call from Tampa the next morning, and less than two months later I was a full-time Bible Worker in Tampa.

While many people talk of glory days gone by, I must say my current years have been the best years of my life. As I look back I see God has brought me to where He wants me to be without me even knowing what His plan was. God did not tell me why I was staying at that small church after my girl friend left me, but He knew. He never told me, “Stay,” but looking back I know it was His plan. The morning after my fiancé broke up with me, I did not see any reason to go to my second job at UPS at 2 AM any more. I only got the job so she would have benefits. Looking back, I know God had me get that job because He knew my Bible Worker job was coming to an end. He never told me that. He didn’t need to. He had it all under control, without me knowing what the plan was, while my head and heart were still in a fog.

Now some people have taken a much easier and shorter route to get to where they are today. They just went to college and straight to their lifetime career. Do I regret taking the longer road? Not at all! Sometimes the shorter, easier route is not the best way to go. Does it sometimes seem like you took the long road to get to a goal in your life? Before you blame yourself for your mistakes, consider that it may have been the exact road God wanted you to take.

“When Pharaoh finally let the people go, God did not lead them along the main road that runs through Philistine territory, even though that was the shortest route to the Promised Land. God said, “If the people are faced with a battle, they might change their minds and return to Egypt.” So God led them in a roundabout way through the wilderness toward the Red Sea. Thus the Israelites left Egypt like an army ready for battle.” Exodus 13:17-18 NLT

Do you feel like your head is in a fog now? Do you feel like you have no direction? I say that as long as you do justly, love mercy, and walk humbly with your God, don’t worry about it. You may be exactly where God wants you to be. God  can make it all work out without telling us at all what is going on. I knew at an early age I would be a preacher one day, but did not know exactly how it would all work out, or that I would be preaching and sharing the gospel as a paid Bible Worker, with the title “lay pastor” tagged on. I also never knew, while sitting in the church pew, as a four-year-old in the 1960’s, that sharing the gospel would also include writing articles for a Sabbath School blog on something called the Internet! Its not exactly how I pictured it while I sat in church as a little boy thinking about it. But God worked it all out on His own. And while it is not exactly how I imagined it would be, it is exceedingly more wonderful than I ever dreamed it could be!

While my head was in a fog, God led the way. I did not need to know if God wanted me to be a paid gospel worker or just a faithful Christian in the secular work force. All I needed, was to do justly, love mercy, and walk humbly with my God. And that, my friend, you can do in any line of work, anywhere.