A. J. Jacobs spent a year living what he considered to be “biblically.” He grew his hair and beard long and walked around New York City dressed like Moses, looking for people who were breaking any of the rules of the Old Testament.

On day 62 he went to Central Park to follow the command to stone adulterers. In Central Park, Mr. Jacobs met a man who looked to be in his mid-70s, sitting on a park bench. He walked up to the man and told him, “I’m trying to live by the rules of the Bible. The Ten Commandments, stoning adulterers …”

This is Mr. Jacob’s own account of how things went from there.

“I’m an adulterer,” the man replies.

“I’ll punch you in the face. I’ll send you to the cemetery.”

“I wouldn’t stone you with big stones,” I say. “Just these little guys.” I open my palm to show him the pebbles. He lunges at me, grabbing one out of my hand, then flinging it at my face. It whizzes by my cheek.

I am stunned for a second. I hadn’t expected this grizzled old man to make the first move. But now there is nothing stopping me from retaliating. An eye for an eye. I take one of the remaining pebbles and whip it at his chest. It bounces off.

“I’ll punch you right in the kisser,” he says.

Mr Jacobs was trying to demonstrate that the biblical requirements are arbitrary and silly. And his “proof” is invalid because he wasn’t interpreting things literally. He was actually going out of his way to “over interpret” what he found in the Old Testament.

Now while Mr. Jacobs was trying to belittle and ridicule the beliefs of those who are trying to live what they believe, the Scribes and Pharisees who lived during Jesus’ time also “over interpreted” what they found in their Bible.

They did it for a different reason.

The religious leaders of Jesus’ time were following the lead of generations of leaders before them who, in an attempt to take the guesswork out of following God’s Law, had interpreted and interpreted, until they had buried what God had intended under mountains of extra rules and guidelines.

Then Jesus came along and lived the Law the way He meant it when He wrote it. That really bothered the Scribes and the Pharisees, because Jesus demonstrated that it wasn’t enough to  follow a check list. There was more to it than that. They understood, but they didn’t want to admit they were doing it wrong. Jesus knew it, too, and they knew He knew it. They doubled down and dug in – they decided Jesus was the problem, not the way they kept the rules.

Jesus wants everyone to know that the Law isn’t just about what things look like on the outside – it’s not about checklists. 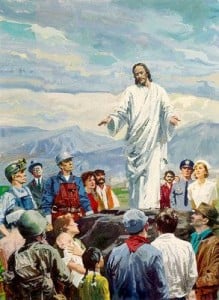 In His life and in the Sermon on the Mount Jesus demonstrated that the Law is more than just words. He expanded and explained the inward part of the Law. The Law doesn’t work from the outside in, but from the inside out. Adultery, murder, dishonoring your parents – all of it is more than actions. They involve thoughts and attitudes that may or may not lead to actions.

In contrast, Jesus spent all day telling everyone he met how much He loved them. He spent the rest of the time telling God how much He loved Him. Think of Mary Magdalene, the disciples, or any of the other folks who walked with Jesus. They didn’t follow Jesus because they had to, but because they couldn’t stay away.

The Pharisees had come to the place where they loved religion for religion’s sake. Even today, it’s easy to fall into that habit. It’s comfortable and satisfying to be able to check the boxes and know we’ve followed all the rules. To Mr. Jacobs, living biblically meant fulfilling lists of rules and punishing anyone who didn’t also follow those rules. What Mr. Jacobs didn’t realize is that we’re not asked to live biblically. We’re told to love God with all our heart, with all our soul and with all our mind. We’re told to love our neighbors as ourselves.

Mr. Jacobs forgot the love part. Jesus taught that just following a set of rules means nothing without love. We can’t forget to love God and each other. If we do that, all the rest will follow as we allow the Holy Spirit guides us.