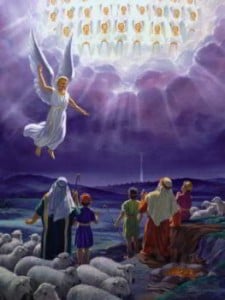 During this time of year much of the world turns its attention to the Bible account of the first Advent of Christ. You can read about it in Matthew 1-2 and Luke 1-2. Just as the angels of heaven brought “good news” to the shepherds, this is a good time for us to share the good news of Jesus with our friends and neighbors.

Jesus saw in every soul one to whom must be given the call to His kingdom. He reached the hearts of the people by going among them as one who desired their good. He sought them in the public streets, in private houses, on the boats, in the synagogue, by the shores of the lake, and at the marriage feast.He met them at their daily vocations, and manifested an interest in their secular affairs. He carried His instruction into the household, bringing families in their own homes under the influence of His divine presence. His strong personal sympathy helped to win hearts.–Ellen White, The Desire of Ages, p. 151.

I understand  why many Christian Protestant writers are now referring to the “Advent” instead of “Christmas.” For some Christians who have taken the trouble to search into ancient history or read the research of others, Christmas has pagan connotations, while “Advent” sounds more biblical. 1  That is all well and good, but I am not promoting anything pagan. I am sharing Jesus with my friends around the world. Still I get feedback from vigilante Christians telling me Christmas is pagan and not biblical. I do not publish these comments on my blog posts, because I am trying to share Jesus with those who may not know Him, and such comments would only get in the way. All they would take away are the supposedly pagan associations, and every year thereafter, Christmas would remind them of pagan practices, rather than the birth of a child who was the Son of God who came to save sinners.

Jesus used terms and stories with which the people were familiar – even when the stories were not exactly true. He met the people where they are. By doing this Jesus was not deceiving people. They understood the stories were not “true stories,” but parables. Likewise, today, people are not deceived by Christmas. Most people realize that Jesus was probably not born on December 25.

Today, even worldly people understand the word “Christmas” and can relate to it. They don’t associate Christmas with paganism, and thus the word “Christmas” is  an open door for me to share Jesus. I suppose I could use the word “Advent” instead, but that word is not going to mean anything to a world dying in sin, desperate for the good news of a Savior. “Advent” is a foreign term to them, and if I am going to follow the practices of Jesus, I’m going to use terms people use in their daily lives. Most people look forward to Christmas, and they are more ready to listen to anything about Jesus at that time of year. What a wonderful opportunity to do some extra sharing!

The parables, by means of which He loved to teach lessons of truth, show how open His spirit was to the influences of nature, and how He delighted to gather the spiritual teaching from the surroundings of daily life.

He drew illustrations also from the events of life, facts of experience familiar to the hearers–the leaven, the hid treasure, the pearl, the fishing net, the lost coin, the prodigal son, the houses on the rock and the sand. In His lessons there was something to interest every mind, to appeal to every heart.  –Ellen White, Child Guidance, Pages 51-52

Remember the parable Jesus told about the rich man and Lazarus in Luke 16:19-31? It seems that He was adapting an old Egyptian (heathen) folk tale well known to his hearers and making a point that what their society valued was abominable to God. 2  He wasn’t making the point that heaven and hell are in constant communion across “a deep gulf fixed” and that the righteous dead are kept “in Abraham’s bosom.” My point of bringing this up is that Jesus was not concerned with “pagan associations.” He used the story and changed it just enough to suit His own purposes. So may we do with the holidays of our countries. They may not have been designed to honor God, but, by His grace, we can change them so that we do honor God in these holidays.

In order to reach the world we must overcome our narrow-minded thinking. Jesus was always right. He was always theologically correct, but He was also open-minded, and was often grieved by the narrow-minded and bigoted self-righteous church members of his day.

December 25 is not the mark of the beast. December 25 does not oppose the seal of God in any way. December 25 is a day like any other day, about which we can say, like David, “This is the day the Lord has made; We will rejoice and be glad in it.” (Psalm 118:24)

(You may be interested in a video by Cindy Tutsch, former Associate Director of the Ellen G. White Estate Associate, on the stand of one of the founders of the Seventh-day Adventist church took on Christmas.)

My  posts only promote Jesus and the biblical accounts of His life, sacrifice and resurrection.

I don’t want to focus on paganism, but I want to tell the Good News of Jesus by my words and by my life both at Christmas and every day of the year.