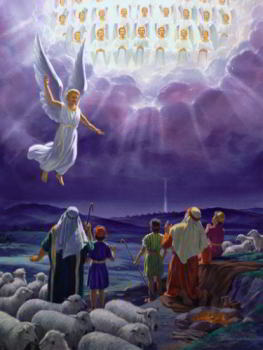 And suddenly there was with the angel a multitude of the heavenly host praising God and saying:  “Glory to God in the highest, And on earth peace, goodwill toward men!” Luke 2:13-14 NKJV

What a wonderful message from heaven to fallen man! The angels did not come and say, “God is over in Bethlehem, and you better get over there, and see if you can get things straightened out between you!” No! God is at peace with man if man will just,

Because the carnal mind is enmity against God. Romans 8:7 NKJV

It is not God who is at enmity with man, it is man who is at enmity with God. In the Garden of Eden it was not God who ran from Adam after they sinned, but Adam who ran away from God.  In the story of the prodigal son, it was not the father but the son who ran away. It was not Jesus who told the demon possessed that He could not stand being near them, but it was the demon possessed, who could not stand being near Jesus.

While humanity could not endure the glory of God, God veiled his divinity in humanity and came down to earth to be Immanuel, “God with us.” (Matthew 1:23) He made Himself like us, so the He could us also make us like Him. When we accept Jesus, we have finally accepted, and stopped running from the Father.

But this great sacrifice was not made in order to create in the Father’s heart a love for man, not to make Him willing to save. No, no! “God so loved the world, that He gave His only-begotten Son.” John 3:16. The Father loves us, not because of the great propitiation, but He provided the propitiation because He loves us. Christ was the medium through which He could pour out His infinite love upon a fallen world. “God was in Christ, reconciling the world unto Himself.” 2 Corinthians 5:19.God suffered with His Son. In the agony of Gethsemane, the death of  Calvary, the heart of Infinite Love paid the price of our redemption.
Jesus said, “Therefore doth My Father love Me, because I lay down My life, that I might take it again.” John 10:17.

That is, “My Father has so loved you that He even loves Me more for giving My life to redeem you. In becoming your Substitute and Surety, by surrendering My life, by taking your liabilities, your transgressions, I am endeared to My Father; for by My sacrifice, God can be just, and yet the Justifier of him who believeth in Jesus.” –Ellen White, Steps to Christ, Pages 13-14

Just as He chose us in Him before the foundation of the world, that we should be holy and without blame before Him in love,  having predestined us to adoption as sons by Jesus Christ to Himself, according to the good pleasure of His will,  to the praise of the glory of His grace, by which He made us accepted in the Beloved. Ephesians 1:4-6 NKJV

God is offering peace and good will towards man. He wants to be “with us.”

Will you accept Christ’s forgiveness with all His life changing power today? Will you allow Him to be “with you”?