Whether we like it or not, someone is always watching us. Have you ever thought about that? Even when you think you’re completely on your own, in a place where you think you don’t know anybody and nobody knows you, people are watching. Being a Christian only increases the number of people watching. 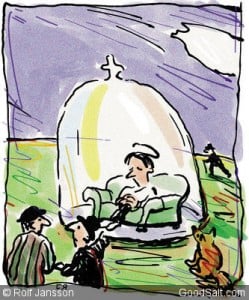 Why do people watch Christians so intently? Some folks would say it’s because they’re waiting for us to mess up. In a way they are.

They want to know why we approach the world like we do. Why are we Christians? And why do we stay Christians? Often the answers to those questions are more obvious to others than they are to us.

There are just a few things that motivate everybody. Paul describes some of them in 1Thessalonians 2:3-6.

“For our exhortation did not come from error or uncleanness, nor was it in deceit. But as we have been approved by God to be entrusted with the gospel, even so we speak, not as pleasing men, but God who tests our hearts. For neither at any time did we use flattering words, as you know, nor a cloak for covetousness—God is witness. Nor did we seek glory from men, either from you or from others, when we might have made demands as apostles of Christ.”

In other words, Paul and Silas wanted the Thessalonians to know that they were not sincerely deluded—completely sucked into an elaborate lie. They weren’t Christians because of all the opportunities for affairs with women, and Paul and Silas weren’t scamming anybody to get something for themselves. And, lastly, they weren’t preaching the Gospel to make people like them more. Today we might say, that Paul and Silas were not motivated by money, sex, and power nor even the approval/admiration of the people around them.

What was the one thing that motivated Paul and Silas? In everything they did, they wanted to please Jesus.

Sometimes I think that this last motivation is so clear and other times, it’s so subtle we may not even recognize it for what it is.

To begin with, no matter what your motivation, you’re going to look the same to the folks around you … for a little while. But then life intrudes and those folks, who are motivated by anything other than pleasing Jesus, are going to fall away. When those who have believed a lie find out the truth, they will become disillusioned and fall away. If a person is motivated by getting more power, when the power doesn’t come to them they decide to find the power through another avenue.

People who are willing to trick or deceive people to benefit themselves will move on as soon as those benefits quit coming in … or when they are caught in their lies.

Now I have to admit that I can’t think of anybody I know who is a Christian because of any one of those three motives. I know there are Christians out there who are. I just don’t happen to know anyone whose motives fit any of those three categories.

The answer to that question is what sometimes makes being a Christian a dangerous proposition. The disciples learned the hard way that they were not always going to gain the admiration of the people around them. In fact, we know that just saying that they believed that Jesus was the Messiah cost all but one of them their lives.

At this moment, American Christians are free to express their belief in Jesus openly, without fear of persecution, but what if …

“Author and educator, Howard Hendricks, sat in a plane that was delayed for take off. After a long wait, the passengers became more and more irritated. Hendricks noticed how gracious one of the flight attendants was as she spoke with them. After the plane finally took off, he told the flight attendant how amazed he was at her poise and self-control, and said he wanted to write a letter of commendation for her to the airline. The stewardess replied that she didn’t work for the airline company, but for Jesus Christ. She said that just before going to work she and her husband prayed together that she would be a good representative of Christ.
“Doing it for Christ’s sake adds another dimension to submission. You are submitting not just to your employer or husband or parent, but to the Lord, because of your love and gratitude for him.”1