Do you remember when ‘friend’ became a verb? I know it was sometime after the beginning of Facebook. About the same time, our definition of ‘friend’ changed a bit, didn’t it? All of a sudden, a friend can be someone you’ve never spoken to or met in person. A friend is someone with whom you trade funny pictures or pithy sayings that did not originate from either of you but were passed along from other friends sometimes accompanied by a terse “LOL” or “ROFL.” 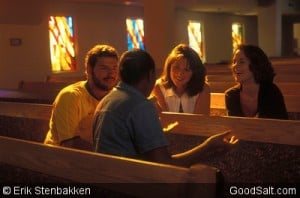 Maybe you’ve seen the car commercial in which a young woman is afraid that her parents are becoming isolated and encourages them to become involved with Facebook. She laments that they only have 19 friends while she has over 600. While she’s sitting alone with her computer, her parents are out with their actual friends doing fun things – demonstrating that she’s the one who is isolated.

It’s kind of sad that the meaning of the word ‘friend’ has become so diluted that it really means nothing anymore. If you invited all your Facebook friends over to your house for a party, would they come? Chances are, other than the folks you know in real life, most of your Facebook friends don’t even know where you live.

We have to make sure that we don’t confuse our Facebook friends with our actual flesh-and-blood friends. We need, not only the conversation of friends, but also the physical interaction of friends to survive. The psychologist, Harry Harlow spent ten years doing isolation experiments with monkeys.

“The monkeys were separated from their mothers at birth and were prevented from developing any other relationships. … every single monkey developed severe psychological problems due to lack of socialization. When the monkeys were introduced to society, they routinely experienced emotional shock characterized by behaviors such as self-clutching, rocking, and the inability to form normal social relationships. For some the shock was so overwhelming that they refused to eat and eventually died. … Depending on the length of their isolation, some monkeys experienced a limited recovery, with one exception: the tests determined that twelve months of isolation virtually eliminated any chance of the monkeys recovering socially.”1

Do we really need to torture monkeys to know that we’re social beings who need to be involved with other people? We get just two chapters into the first book of the Bible and God, Himself tells us, “It is not good that man should be alone; I will make him a helper comparable to him.” Genesis 2:18

We need friends, real friends. Why?

“Things will go wrong with every one; sadness and discouragement press every soul; then a personal presence, a friend who will comfort and impart strength, will turn back the darts of the enemy that are aimed to destroy. Christian friends are not half as plentiful as they should be. In hours of temptation, in a crisis, what a value is a true friend! Satan at such times sends along his agents to cause the trembling limbs to stumble; but the true friends who will counsel, who will impart magnetic hopefulness, the calming faith that uplifts the soul—oh, such help is worth more than precious pearls” (E. G. White,(Letter 7, 1883) Bible Commentary, Volume 3, p.1163)

Do you have a friend like that? Are you a friend like that? How can we become that kind of friend? Well, all we really need to do is look at Jesus. His earthly example is the pattern all friendships should follow. Jesus was encouraging, patient, loving, but He didn’t use flattery or money to artificially bolster His friends or friendships. His honesty and love for His friends was strong enough. Even the friends He knew were going to hurt Him never heard anything from Jesus but encouragement.

How can we find and be friends like Jesus and His disciples in our everyday lives? As author, John Eldridge explains, we can be inspired by our large church family, but we can’t get to really and truly know each other by getting together for a couple of hours each week. But we can get to know ten or twelve.

“This is the way of the kingdom of God. Though we are part of a great company, we are meant to live in little platoons. The little companies we form must be small enough for each of the members to know one another as friends and allies. … It can be inspiring and encouraging to celebrate with a big ol’ crowd of people, but who will fight for your heart?”2

I love that mental picture – little platoons of believers, standing together against the enemy and loving and encouraging each other to stay committed to Jesus Christ.

There will be times when our minds and/or bodies will be overwhelmed and exhausted from the enemy’s attacks. That’s when our friends will surround us with their arms and their prayers, giving us time to recover. Next time we’ll be the ones surrounding and praying while another friend recuperates.

As we wait for Jesus to come, we can’t afford to have friends like Job had — “I am one mocked by his friends, who called on God, and He answered him, the just and blameless who is ridiculed.” Job 12:4

“Greater love has no one than this, than to lay down one’s life for his friends. You are My friends if you do whatever I command you. No longer do I call you servants, for a servant does not know what his master is doing; but I have called you friends, for all things that I heard from My Father I have made known to you.” John 15:13-15