As did all the other Gospel writers, Matthew wrote about the resurrection of Jesus. Also, as did his fellow writers, he wrote next to nothing about what the meaning of the Resurrection itself was. Though they depicted the story of the Resurrection, Matthew, Mark, Luke, and John gave us no real theological explanation of it, even though it’s so central to the Christian faith. It’s in Paul’s writings that we get the most detailed explanation about the meaning of the cross. 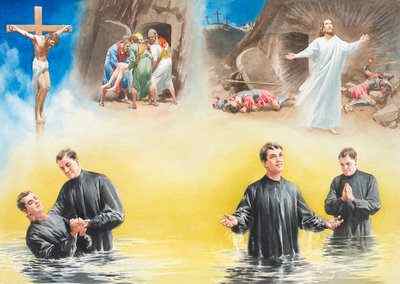 “But now Christ is risen from the dead, and has become the firstfruits of those who have fallen asleep. For since by man came death, by Man also came the resurrection of the dead. For as in Adam all die, even so in Christ all shall be made alive” (1 Cor. 15:20-22, NKJV). Paul also wrote that we have been “buried with Him in baptism, in which you also were raised with Him through faith in the working of God, who raised Him from the dead” (Col. 2:12, NKJV). Peter, too, has something to say on this crucial topic: “There is also an antitype which now saves us—baptism (not the removal of the filth of the flesh, but the answer of a good conscience toward God), through the resurrection of Jesus Christ” (1 Pet. 3:21, NKJV). Though we don’t know why the Gospel writers didn’t go into any detailed explanation, some scholars have seen this as more evidence of the truthfulness of their accounts. After all, writing many years after the events, why didn’t they use this opportunity to give a detailed explanation of what they wanted people to believe about the Resurrection? If it were a fraud or a con, why not take the opportunity to make it mean whatever they wanted it to mean? Instead, they simply tell the story, making no attempt to embellish it with any theological explanations as to what it all was supposed to mean.