“Therefore gird up the loins of your mind, be sober, and rest your hope fully upon the grace that is to be brought to you at the revelation of Jesus Christ; as obedient children, not conforming yourselves to the former lusts, as in your ignorance; but as He who called you is holy, you also be holy in all your conduct, because it is written, ‘Be holy, for I am holy.’” 1 Peter 1:13-16

Peter doesn’t mess around, does he? He says exactly what he means and doesn’t leave any room for misunderstanding – “Be holy.” Isn’t it weird, then, that in this day and age, when somebody says someone is holy, it usually doesn’t sound like a compliment. “Look at him. Doesn’t he think he’s all holy?”

The problem is, as will everything else in this sinful world, the enemy has worked hard to make sure that the qualities that God asks for have been twisted and misused until they don’t resemble their true definition any more. 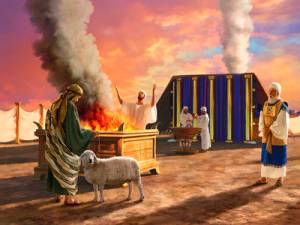 Thankfully, God prepared for that and made sure we had some examples. One of the best of which is His relationship with the Israelites through His sanctuary.

Every part of the Sanctuary was a symbol for God’s desire to be in the midst of His children and to be involved in their daily lives.

If you had asked the Israelites of Moses’ time, David’s time, or even Jesus’ time, what percentage of their lives was “religious,” they probably would have looked at you like you didn’t have any idea what you were talking about Religion wasn’t just a percentage of their lives. Being a Jew was their whole existence. It was their national identity, their religious identity, what they ate, where they lived, and who they married. It was even part of how they washed their hands. The problem is, with a few notable exceptions, the Jews became bogged down in their own rules and traditions instead of allowing God to set them free.

One of those exceptions was King David. Over and over again, in the Psalms, we can read David’s desire to meet with God in His Sanctuary. Psalm 27 encapsulates how David feels about the Sanctuary, specifically in verses 4-13:

“One thing I have desired of the Lord, That will I seek:
That I may dwell in the house of the Lord All the days of my life, To behold the beauty of the Lord, And to inquire in His temple. For in the time of trouble He shall hide me in His pavilion; In the secret place of His tabernacle He shall hide me; He shall set me high upon a rock. And now my head shall be lifted up above my enemies all around me; Therefore I will offer sacrifices of joy in His tabernacle; I will sing, yes, I will sing praises to the Lord. Hear, O Lord, when I cry with my voice! Have mercy also upon me, and answer me. When You said, ‘Seek My face,’ My heart said to You, ‘Your face, Lord, I will seek.’ Do not hide Your face from me; Do not turn Your servant away in anger; You have been my help; Do not leave me nor forsake me, O God of my salvation. When my father and my mother forsake me, Then the Lord will take care of me. Teach me Your way, O Lord, And lead me in a smooth path, because of my enemies. Do not deliver me to the will of my adversaries; For false witnesses have risen against me, And such as breathe out violence. I would have lost heart, unless I had believed That I would see the goodness of the Lord In the land of the living.”

David’s desire to experience that closeness with God that the Sanctuary represented consumed his life. Yes, we all know that David made some horrific mistakes, but He never lost his hunger for God. And God recognized and honored David for that – being called a man after God’s own heart should be something for which we all strive.

So, how can we find and maintain that “sanctuary relationship” with God? How can we “be holy?”

Well, we have to decide whether we’re going to admire Jesus or are we going to follow Him. Although those two things may sound similar, in this context, they are quite different.

Many of the people who came after Jesus turned out to be admirers – they left Him when things weren’t easy anymore. David didn’t turn back from his love of God, even when he spent years hiding from King Saul or when some of his own sons turned against him and his family was torn apart.

Many of us want to experience the feel good times with Jesus but aren’t committed to sticking around when things get rough.

“Jesus has many who love his kingdom in heaven, but few who bear his cross. He has many who desire comfort, but few who desire suffering. He finds many to share his feast, but few his fasting. All desire to rejoice with him, but few are willing to suffer for his sake. Many follow Jesus to the breaking of bread, but few to the drinking of the cup of his passion. Many admire his miracles, but few follow him in the humiliation of the cross.”2

Being holy isn’t just being a Christian, going to church on a certain day or however many times a week. It isn’t praying before meals or reading our Bibles for a certain number of minutes every day. We can’t be holy sometimes and then sometimes not. Being holy is not about a particular denomination or how religious you are. Being holy isn’t a part of our lives, it has to be our identity in Jesus Christ.

Does that mean we are exempt from making, sometimes, horrific mistakes? Afraid not. But we will, like David, center our lives on our God, our Savior and Redeemer, and our Best Friend.

“Christ says, ‘Give me all. I don’t want so much of your time and so much of your money and so much of your work: I want you. I have not come to torment your natural self, but to kill it. No half-measures are any good. I don’t want to cut off a branch here and a branch there. I want to have the whole tree down. I don’t want to drill the tooth, or crown it, or stop it, but to have it out. Hand over the whole natural self, all the desires which you think are innocent as well as the ones you think are wicked—the whole outfit. I will give you a new self instead. In fact, I will give you myself: my own will shall become yours.’”3

That is my prayer. Is it yours?