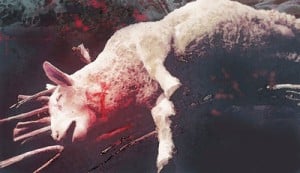 Go back and read that quote again…slowly…really think about what it means. Can you feel the weight of it? It is probably the best and clearest description of the plan of salvation that I know. Jesus paid the penalty for my sin, instead of me. Can you wrap your imagination around the enormity of it?

There’s a popular Christian song on the radio these days called, “Should’ve Been Me” and the chorus reminds us of that we haven’t been paying the consequences of our own sinful actions.

From the very first sin in the Garden of Eden, God has been covering our sins with the blood of a sacrificed Lamb so that instead of being permanently separated from God, we can live with Him for eternity. Instead of getting what we deserve, we get what He deserved. Instead of being a subject of Satan, we can be a friend of God.

I’ve been trying to think about the Old Testament sacrificial system, and I have to admit that it’s really hard for me to imagine. I’m thinking that if, like me, you live in a western culture, it’s probably hard for you too. Many of us live in a society that is mostly “sanitized for [our] protection.” The closest most of us get to actual blood shed is our own if we happen to accidentally cut ourselves. Those few drops of blood are nothing compared to what the priests in the Jewish Tabernacle must have been exposed to on a daily basis. After sinners had confessed their sins over the innocent and docile lamb they had brought, it was their job to cut the throat of the animal, and a priest had to catch the blood in a basin and carry it into the sanctuary. This was to impress on the sinner the fact that his sins caused the death of an innocent substitute.

Several times in my life, I’ve had to look into the eyes of a pet and make the decision to have it put to sleep. It has been absolutely heart-rending every single time even though I know that the death will be painless. I cannot imagine holding a healthy, trusting lamb and deliberately cutting its throat.

As horrible as the whole process sounds, the Bible tells us that even such things can become routine. That’s what happened to the Jewish nation. They forgot that the sacrifices were not an end in themselves; they were object lessons to demonstrate that the wages of sin is death. And if we don’t want to pay with our own blood, we must accept the payment of someone who is willing to take our place.

“When we were utterly helpless, Christ came at just the right time and died for us sinners. Now, most people would not be willing to die for an upright person, though someone might perhaps be willing to die for a person who is especially good. But God showed his great love for us by sending Christ to die for us while we were still sinners.” Romans 5:6-8(NLT)

Jesus died instead of us.

I read an amazing story this week from the book, Hidden in Plain Sight, written by Mark Buchanan. The story is about a woman from Rwanda, named Regine, who became a Christian as she read her sister’s Bible. Later she moved to Canada because of the genocide in Rwanda at that time. In Canada, she met Gordon, and they got married. Then they decided that they needed to go back to Rwanda to show Christ’s love to people who had been her enemies.

It was in Rwanda that she met a woman whose only son had been murdered.

“She was consumed with grief and hate and bitterness. ‘God,’ she prayed, ‘reveal my son’s killer.’

“One night she dreamed she was going to heaven. But there was a complication: in order to get to heaven she had to pass through a certain house. She had to walk down the street, enter the house through the front door, go through its rooms, up the stairs, and exit through the back door.

She asked God whose house this was.

“The road to heaven passed through the house of her enemy.

“Two nights later, there was a knock at her door. She opened it, and there stood a young man. He was about her son’s age.

“He hesitated. Then he said, ‘I am the one who killed your son. Since that day, I have had no life. No peace. So here I am. I am placing my life in your hands. Kill me. I am dead already. Throw me in jail. I am in prison already. Torture me. I am in torment already. Do with me as you wish.’

“The woman had prayed for this day. Now it had arrived, and she didn’t know what to do. She found, to her own surprise, that she did not want to kill him. Or throw him in jail. Or torture him. In that moment of reckoning, she found she only wanted one thing: a son.

Could you do it? Could I?

That’s exactly what God has done for each of us. Except He didn’t wait for us to come to Him, He came looking for us! “While we were yet sinners…” He put a plan in action before the foundation of the world so that, if we choose to, we can go into His home, live with Him, eat His food, wear the robes that He has prepared for us, and become His children.

What God did for humanity is unfathomable to the sinful, human mind. It’s not logical – it doesn’t make sense.

“It would be well for us to spend a thoughtful hour each day in contemplation of the life of Christ. We should take it point by point, and let the imagination grasp each scene, especially the closing ones. As we thus dwell upon His great sacrifice for us, our confidence in Him will be more constant, our love will be quickened, and we shall be more deeply imbued with His spirit. If we would be saved at last, we must learn the lesson of penitence and humiliation at the foot of the cross.” (E.G. White, Desire of Ages, p.83)